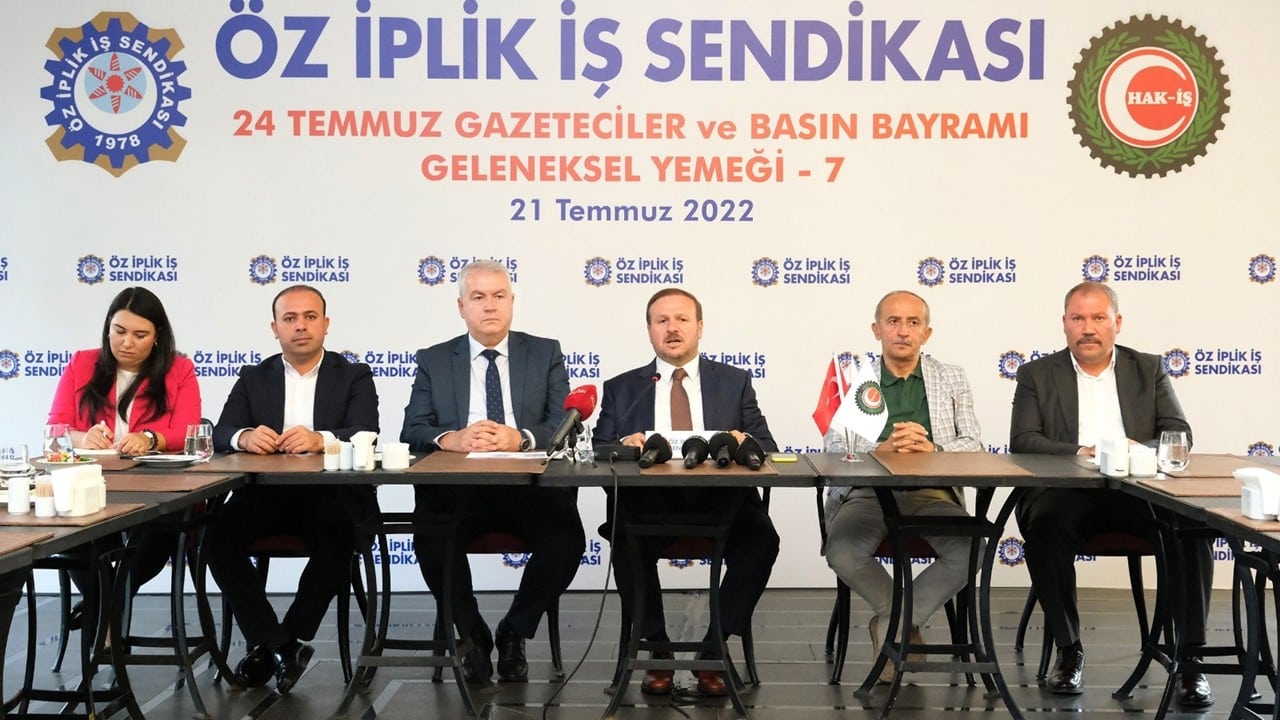 Mehmet KAYA ANKARA – ÖZ İPLİK-İŞ Chairman Rafi Ay said that digital transformation and green transformation require a cost and this cost should be undertaken by the capital sector. Meeting with the members of the press before the July 24 Press Festival, Rafi Ay noted that the transformation process should be managed in social dialogue by all segments of the society, but that the union organization was limited and suppressed, and that such a process would not be successful. Rafi Ay emphasized that authorization procedures should be changed in order to pave the way for union organization, and that the collective bargaining process should begin as soon as the authorization is determined. Rafi Ay, reminding that inflation affects fixed incomes the most, said that they said yes to the fight against inflation, but they would not allow the costs to be borne by the working segments. Rafi Ay pointed out that there is a historical break in the environment where a stable economy and globally changing conditions, digital transformation and green transformation continue. Noting that the key to the management of this process and the realization of the transformation is social dialogue, but there is a lack of organization of the labor sector to provide this opportunity, Rafi Ay said, “A significant part of the problems we experience today is due to the suppression of the labor movement, the absence of an organized collective bargaining system, that is, the lack of a unionized working life. In our opinion, at this turning point in history, I would like to emphasize an issue that we consider to be of historical importance: The first step to overcome the economic and social problems of our country is to remove the obstacles in front of organization. It is not possible to solve problems with low wages, to keep companies alive by depriving workers of their rights, and to strengthen the economy.” said. Green transformation, digitization etc. Noting that the processes will cause a cost and that this cost should be borne by the capital, Rafi Ay reminded that Turkey is one of the few countries that work the most during the weekly working period. Stating that one cannot go anywhere by suppressing the wages of the labor sector and making them work more, Ay said, “Now, the capital sector and the employer sector should understand that it is necessary to protect the job, the worker, the economy and the country, not the profitability, and should undertake the burden of this transformation process. There is not enough capital accumulation, the profitability is low. No, this country has sufficient capital and sufficient accumulation. The new era has only one motto: You can’t leave anyone behind! When you lose a person, you will not be able to stand. In order to manage this process, social dialogue, which is the solution of a century, is necessary, in short, the joint work of workers, employers and politics-government.

Authorization procedure should be changed, penalties should be increased

Rafi Ay stated that one of the most important obstacles in front of organizing is that the penalties imposed in case employers prevent organizing, which is a constitutional right, are less. He also suggested a technical regulation on organizing. Rafi Ay requested that the authorization procedure be facilitated and noted that the use of union rights and the commencement of collective bargaining should not be prevented by the employer’s going to court as soon as the authorization is established with union membership in a workplace. Rafi Ay said, “All records are in the hands of our state, in the computer environment. There is no need for special study to see if a workplace has authority. After the authorization, he takes the matter to the judiciary and puts pressure on the worker in this process.”

Rafi Ay, chairman of ÖZ İPLİK-İŞ union, stated that a rival union attempted to end the organization of ÖZ İPLİK-İŞ at a workplace in Karabük and said, “The aim here is to end the organization in the factory. Because we are at the stage of having the highest number of members in the business line, we have such a goal.” Rafi Ay stated that the rival union is trying to put pressure on the workers for this reason, and noted that one of its members was threatened with beating and death, and that they filed a criminal complaint about the incident. Rafi Ay also announced that they are calling for solidarity with all unions in organizing.