VR glasses are not enough anymore. It’s time for a space helmet!

A cinema room, an astronaut’s helmet and a trip to the International Space Station – this is how National Geographic launched its latest production. All this to show in the most realistic way and from the cosmonaut’s point of view what life looks like on the Blue Planet. The documentary series “One Strange Rock” is a giant leap forward in the field of science and nature films. It consists of 10 episodes showing breathtaking pictures of the Earth at different scales from the perspective of space. The shots are taken from the International Space Station, located approximately 400 kilometers above the Earth. The episodes feature eight world-famous astronauts who introduce the viewer to this extraordinary cosmic-terrestrial world. They include the Canadian astronaut and extraterrestrial musician Chris Hadfield and Mae Jemison, the first African American woman to go into space. However, the most interesting element of the whole campaign promoting the series “One Strange Rock” was the pre-premiere screening, which in no way resembled a classic trip to the cinema. The aforementioned Chris Hadfield created a special projection helmet – Space Projection Helmet, in which he used the virtual reality mechanism. Compared to the known VR glasses, which due to their construction serve a limited field of view, the helmet made it possible for the viewer to completely “immerse” the viewer into the displayed images and gain almost literally “astronaut’s eyes”.
Photo: Eduardo Munoz for National Geographic The helmet cover acts as a screen, and a small laser projector installed inside fills the field of view and allows you to observe wonderful images of space and the Earth. The outer appearance and size of the helmet are also reminiscent of space travel. It was designed in such a way as to imitate the helmets of space suits. 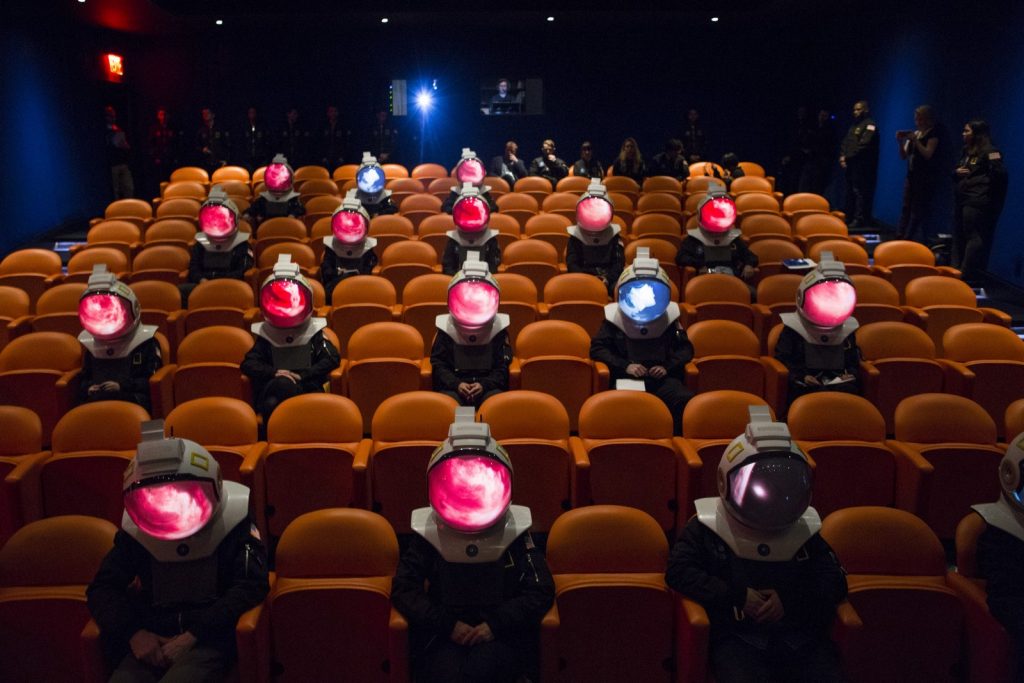 Photo: Eduardo Munoz for National Geographic Jane Root, CEO of Nutopia, one of the producers of the series, emphasizes that the goal was to create a show that allows you to look at the Earth from a completely different perspective and realize what systems and connections exist on our planet and why life is so amazing here. World-famous stars from the film industry are involved in the project. The series was directed by Darren Aronofsky, creator of such hits as “Pi,” “Black Swan” and “Requiem for a Dream,” and narrated by famous actor Will Smith. The premiere episode of the new series appeared on the National Geografic channel on March 26, in 172 countries around the world. The next episodes can be watched (unfortunately without a helmet) on Tuesdays, after 22:00.