You have to go with the times. We know it, you know, and the Vatican knows it, which has decided to organize the first hackathon in its history. The initiative was headed by Father Eric Salobir, Father Philip Larrey and Jakub Florkiewicz. The groundbreaking event for the Vatican will begin tomorrow. The organizers put emphasis on dialogue between various communities. In the spirit of this thought, people of various educational backgrounds, religions and ethnic origins were invited to participate. In conversations with journalists, Fr. Eric Salobir emphasized many times (on other occasions) that he wanted a greater flow of thoughts and ideas between the technical world and the humanists. Nearly 120 participants will work for 36 hours, covering topics such as social integration, interfaith dialogue, and issues related to migration and refugees. Father Eric Salobir, when asked by The Next Web magazine about the marketing dimension of this action, laughs. “We don’t have time and resources for marketing, that’s not how it is done. We want to be useful, that’s why we chose these and not other problems to solve ”. Industry giants such as Google and Microsoft also joined the action. It is impossible not to keep your fingers crossed for this initiative and count on its real response. After all, it has a chance to resonate not only among religious and academic circles, but also among other organizations that can spread their wings thanks to technology. Let VHack be a good example for them!

I invite you to the podcast of specialists from the Eura7 Group! Together with the team, we help companies grow. We achieve this goal thanks to an appropriate strategy, modern tools and effective marketing activities. We love to combine new technologies, marketing and art. Just like exceptional guests who share their knowledge, experience and ideas in our podcast! See the episodes 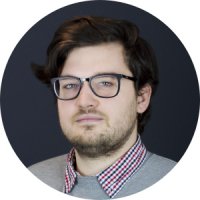 The word specialist who ditched the radio microphone in favor of marketing. Passionate about music, motorization and advertising creations that can be squeezed into an armchair or amused to tears. During his short professional career, he had the opportunity to test his skills in analytical, strategic and creative positions. In the Abanana agency he fulfills himself as a junior public relations specialist. He lacks assertiveness towards his own creations, which is why he became a die-hard fan of it while working with Microsoft.