Will the holdings stop while the banks are flying around in Borsa Istanbul?

Barış ERKAYA / EXCHANGE ANALYSIS Aggressive movements in the stock markets have always aroused suspicion. Although the stock market seems to have increased with a net foreign inflow of 700 million dollars according to official figures, the signs of a return from the top to the bottom in the foreign share have still not been received. According to Forex data, the share of foreigners in clearing custody, which peaked at 35.11 percent on August 25, is 33.57 percent as of September 9, 2022. In other words, there is a decrease in the foreign share again. Of course, when the transfers of foreign purchases and sales from other intermediary institutions are completed, we will have access to more precise data. However, it should not be forgotten that the net sales amount realized by foreign investors from May 2022 to the end of July is 2.4 billion dollars. $3.6 billion since the beginning of the year. In the foreign sales wave that has been continuing rapidly since 2019, we saw net foreign purchases of $1.4 billion in November-December 2020 and $1.1 billion in November 2021. However, after each of these, for example, we saw net foreign sales of $1.8 billion in the January-April 2021 period and close to $4 billion between December 2021 and May 2022. In other words, it is still too early to describe these foreign purchases as permanent purchases. As for the part that is different from previous periods: Domestic investors no longer lose their goods cheaply. We do not see panic-based sales for the fear of loss in individual investors who have bank shares. A significant portion of the sales come from the more professional type of investors. This is what health is and what it should be. In this, the fact that individual investors are much higher than their costs in the shares they have held for a very long time seems to be a serious factor. 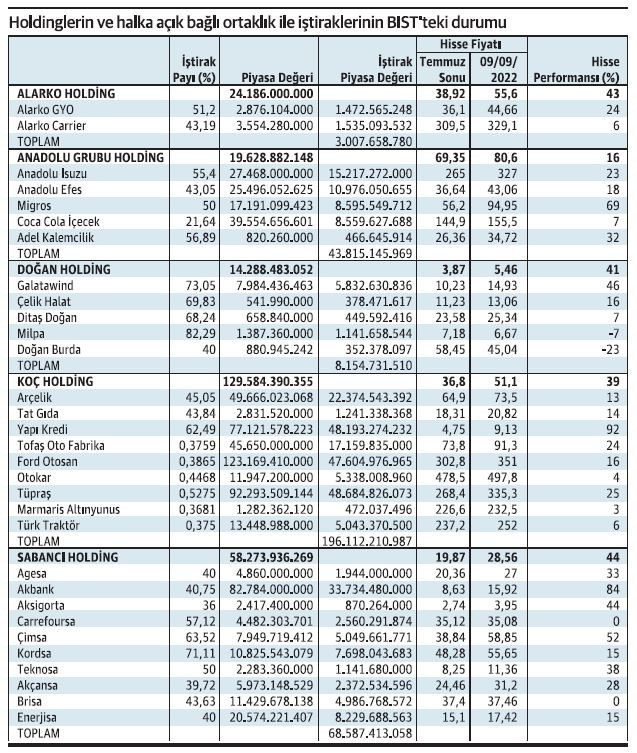 The rise did not spread to the general

Well, let’s take a look at the footnotes of the recent rise. Banking shares were the sector that left its mark on the stock market. In fact, this is the basis of some investors’ complaints that although the index rose in the last rally in the stock market, profits could not be written to a large extent. Banks raised the index. However, life has not changed much for those who hold positions in non-banking BIST-30 and 100 shares. On the other hand, the discount of BIST-100 index compared to peer country stock markets decreased slightly. As for what to expect in the continuation of this rise, which has not started with banks so far…

Mobility may shift to holdings

Many of the experts believe that there may be a shift from bank stocks that make a rapid premium to bank stocks that have high profitability but have not kept up with the rise of the sector. On the other hand, there are many other stocks that have gained value in the rise experienced since the end of July in Borsa Istanbul. Last week, within the framework of the latest financial data, we gave the BIST-100 shares, which were the cheapest in the sector, in tabular form. But after that, experts open a separate heading especially for holdings. It is thought that there may be new purchases in holdings that do business in profitable sectors and have subsidiaries whose market value has increased rapidly in the stock market.

At this point, the affiliates of these major holdings (Alarko Holding, Anadolu Group Holding, Doğan Holding, Koç Holding, Sabancı Holding) whose stocks are traded in Borsa Istanbul, their market values, the value realized during the July-September rise in share prices. We analyzed the increments one by one. Without the need for any comment, each investor can make his own analysis by revealing which main business line the holdings generate more turnover and profit, their expectations about the future, and the future expectations of their subsidiaries and affiliates. Again, in this analysis, we have prepared the main income sources of outstanding holdings traded on the stock exchange in a table for you.

Main fields of activity of the holdings

For example, Alarko Holding is a contracting, land development and real estate holding, as you can imagine. However, it also generates significant revenues from the energy sector. Anadolu Group is a beverage industry conglomerate, but together with Migros, it also has a significant retail turnover. Doğan Holding, which used to be an undisputed media conglomerate, is now a fuel distribution conglomerate. Koç Holding has been an energy and automotive conglomerate since Tüpraş. Sabancı Holding is a finance and energy conglomerate. In other words, future expectations regarding these sectors are also closely related to these holdings. Again, a stock market appreciation in these sectors means that the valuations of these holdings will also be affected. 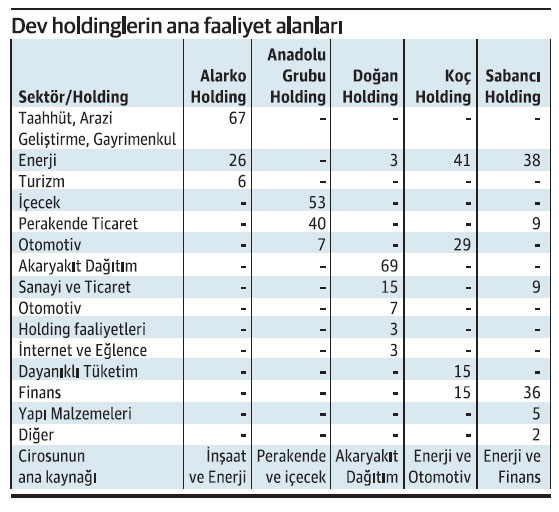 There are many times more than the public ones

Let’s go through the holdings one by one. Although Alarko Holding has only 2 affiliates and subsidiaries listed on the stock exchange, it has 25 subsidiaries, 14 joint ventures, 1 joint venture and 3 subsidiaries that are not listed on the stock exchange and consolidated in its balance sheet with different valuation methods. . Some of its subsidiaries are also distributed in countries such as Kazakhstan, Morocco and Romania. Apart from its publicly traded subsidiaries, Anadolu Group Holding has 64 non-listed subsidiaries, 5 business partnerships (one of them TOGG), and 2 subsidiaries (one of them is Getir Vehicle). These companies operate all over the world, such as Russia, Syria, Kazakhstan, Uzbekistan, Tajikistan, Iraq, the Netherlands, Turkmenistan, Pakistan, Jordan, Azerbaijan, Kyrgyzstan, Germany, Moldova, Georgia, Ukraine, Belarus, and TRNC. Doğan Holding consolidates 51 subsidiaries and 9 joint ventures, excluding the publicly traded ones. These, too, have operations spanning every continent such as the Netherlands, Germany, China, Uzbekistan, Italy, India, Romania, and the USA. Koç Holding is yet another giant holding operating with 164 subsidiaries and 27 business partnerships. It has subsidiaries and subsidiaries that carry out activities that can compete with publicly traded ones all over the world. The situation in Sabancı Holding does not seem to be any different from that of Koç Holding. For example, when we consider the listed subsidiaries of Anadolu Group Holding, Koç Holding and Sabancı Holding, the total market value of the shares of only these groups’ subsidiaries has reached levels much higher than their own market values.