Vacation allowance: What can I do with the amount received? 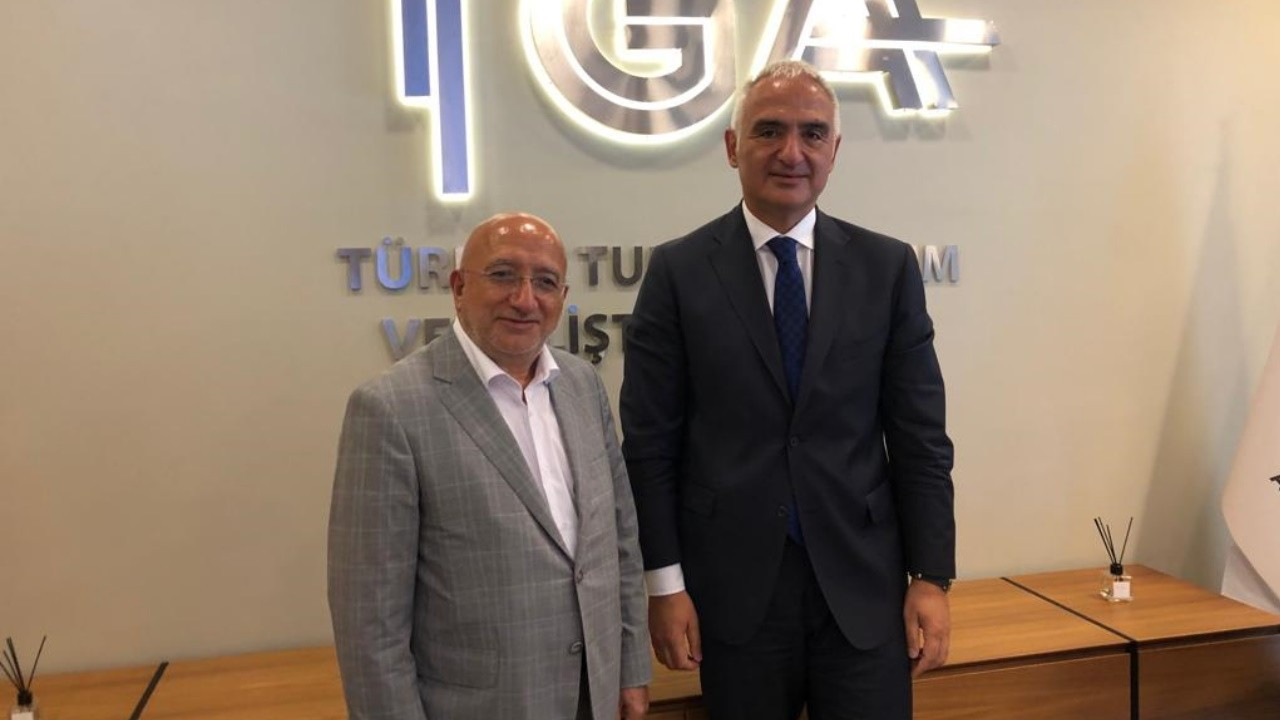 Vahap MUNYAR
Culture and Tourism Minister Mehmet Nuri Ersoy stated that the Turkish Tourism Promotion and Development Agency (TGA) has successfully continued on its way and has begun to show its impact. Ersoy said from TGA sources that 110 million dollars were spent last year for the promotion of Turkey, and that this year’s expenditure will reach 140 million dollars. Ersoy said, “This year, we announced a target of 42 million tourists and 35 billion dollars in revenue. Now we are revising upwards. We anticipate that we will be able to host 47 million tourists this year and reach a record revenue of 37 billion dollars.”

Mehmet Nuri Ersoy held a chat meeting with Timuçin Güler, General Manager of Promotion, and Yalçın Lokmanhekim, General Manager of TGA, to explain the agency’s work and contributions to tourism at the headquarters of TGA. Emphasizing that there have been different crises one after the other and that they have a negative impact on tourism, Ersoy said: “Crises have happened in the past and will happen in the future. This applies to all countries. At that time, it was necessary to immunize our tourism against crises. Immunity can be gained through market diversification. Market diversification can also be achieved through promotion. In the strategy we announced in 2018, we said ‘we will do it together with the state’, and we established the TGA in accordance with that logic. TGA created its model in Italy 100 years before us, in 1919. It was founded in Germany in 1948 and Dubai in 1997. Establishing TGA has been successful in all countries. We see that as well.”

The minister will leave the administration.

Culture and Tourism Minister Ersoy talked about the structure of TGA as follows: “There are 3 people representing the public, including the Minister, in the 15-member board of directors of TGA. The state occupies the second place with 19 percent in the contribution to the budget of the NPL. THY Chairman of the Board of Directors is a natural member of the TGA management. TAV and IGA will also enter the management alternately. During this period, TAV is in management. Other members of the board of directors are elected representatives of the sector from their regions. With the new law amendment, we remove the Minister from the management of TGA. A representative from the gastronomy sector will enter the administration. In addition, a member will be elected to represent the beach and sea tourism side. We think that those who pay money, that is, those who contribute to the promotion budget, should be represented in the TGA. It is forbidden for civil servants to work in the TGA.”

Reminding that tourism was declared a “strategic sector” by President Recep Tayyip Erdoğan, Ersoy continued as follows: “We consider the 330 cities THY flies to as our markets. We plan promotions abroad accordingly. We act with the aim of spreading tourism with 81 cities. We enter TV channels, newspapers, digital platforms and social media accounts in different countries with promotion. In addition, our “Go Turkiye” site creates a promotional environment in 10 different languages, from English to Russian, German to Chinese, French, Arabic to Spanish. 154 different sites are working. 81 provinces are listed on this site. Our 51 tourism products stand out on this platform. ‘Go Turkey’ was visited by 75.6 million people in the first 8 months of this year. We expect the number of visitors to increase to 200 million. Our number of followers on Instagram has reached 1.7 million.”

There will be positive correction

Mehmet Nuri Ersoy, on a question, reported that TGA spent 110 million dollars for the promotion of Turkey in 2021, and this year the figure will reach 140 million dollars. Ersoy also shared data on the number of tourists and revenues: “We announced a target of 42 million tourists and 35 billion dollars in revenue for this year. Despite the war in the Black Sea, we did not change this goal. Now we’re changing upwards. The number of tourists will increase to 47 million this year, and our revenues will break a record with 37 billion dollars. I believe we can make another positive correction.”

Minister of Culture and Tourism Mehmet Nuri Ersoy stated that it is more accurate to look at the values ​​per overnight stay when evaluating tourism revenues and said: Long-term stays can reduce the income per tourist. In addition, the long-term stay of Turks abroad in their home country may also reduce the income per tourist. * The average length of stay of tourists was 10.8 days last year. It looks like it will go down to 9.7 days this year. * While revenue per tourist was $834 in 2021, we expect this year’s realization to be $788. * Income per night was $65.9 last year. It rose to $81.2 this year. * We are working to establish operators with Turkish-origin foreign-flagged air fleets in European destinations next year. For some, the first steps have been taken.

* We own the world’s most important airport and cruise port. Work continues to bring these two together in terms of transportation. In this way, the cruise port will be the homeport. Negotiations are continuing for the construction of a new cruise port in Istanbul. * We are working to spread tourism with 81. We want to increase the average overnight income along with the number of tourists. We think that we will reach 1000 dollars in revenue per tourist in 2028. * We do not want to be too dependent on the single market in tourism. When listing our tourism markets, we see it as a more correct strategy to say “top 10”, “top 20” instead of counting “top 5 countries”. * We interviewed Michelin executives. Restaurants on the list will be announced in October. They said that in a period like the pandemic, we achieved a very important success in 2 years. * We gave serious weight to vocational high schools. A student graduates by learning 3 languages. Qualified personnel are gained in this way. There was a serious backlog in our vocational high schools.