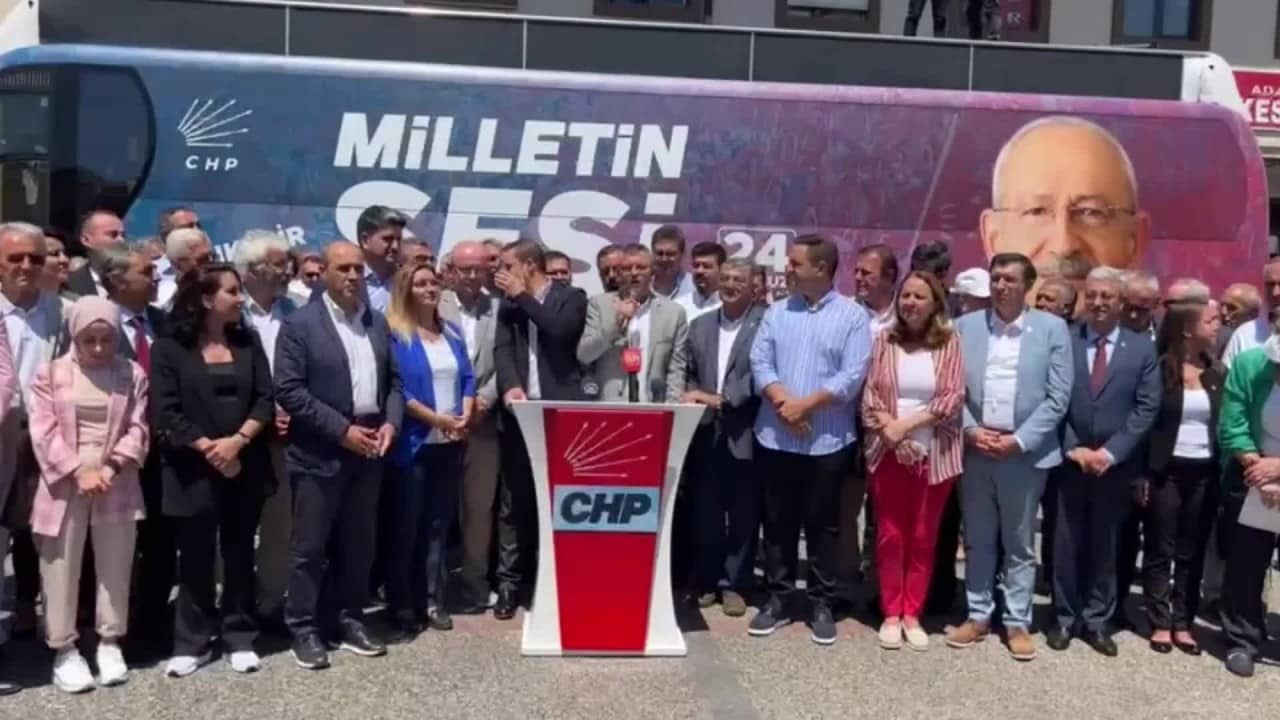 CHP Deputy Chairman and Balıkesir Deputy Ahmet Akın, CHP Group Deputy Chairman Özgür Özel, CHP deputies, Party ahead of the “Voice of the Nation Rally” to be held in Kuvay-i Milliye Square in Balıkesir on Sunday, July 24, with the participation of CHP Chairman Kemal Kılıçdaroğlu. A statement was made about the rally in Ali Hikmet Pasha Square with the participation of council members, provincial and district administrators and municipal council members. CHP’s Özel said, “We will not stop, we will walk until we take the power from a single man and give it to our nation, until the people are in power, the power of the people, the power of the retired, the laborer, the poor and our hopeless youth. We will walk together with you. We will win.” He called on the citizens to participate in the rally. In his private speech, he said: “Today, 50 people are here. Until Sunday, every deputy of the CHP, except for very special excuses, to invite the nation itself to the Voice of the Nation rally in Balikesir, its districts, towns, villages and neighborhoods that were unfairly closed, to shout out the call of our President to the people of Balikesir. We are here with you to invite all our citizens to that big meeting where the heart of the Aegean region and Turkey, not Balıkesir, will beat and the third of the Nation’s Voice rallies, which is one of the important milestones of our march to power, will take place.

“Today, the government has undertaken the task of opposing the opposition”

Balıkesir, Turkey knows that the knife is in the bone. There is no strength to endure, no patience to be consumed. Psychological power in Turkey has already changed hands. The AK Party and its supporter MHP prefer to oppose the opposition instead of being in power, saying what they will do, and producing solutions to problems. Today, the government has undertaken the task of opposing the opposition. Today, the opposition Nation Alliance and the founder of our alliance, our party’s Chairman, Mr. Kemal Kılıçdaroğlu, shows the ways to identify and solve the problems, and counts the days until the election to take over the power.

The aforementioned National War of Independence, in this land where its fire was lit and its last seal was made, the sign they made in Balıkesir, when someone called them national, came from Egypt; The slogan is that they should not hide from our nation what they received from Germany from Hitler. They also abandoned those who made the sign of Egypt, Rabia. They go around saying ‘one state, one nation, one flag’ over and over again, which none of us will object to. The history of world politics will not surrender the future of this country to a heroism that adapts ‘one state, one nation, one leader’ Adolf Hitler to Turkey today and will carry him to a single leadership. However, we have no curiosity, but if you are going to talk about a single leader, we will talk about Kemal Kılıçdaroğlu, the only leader who can subcontract you when you are in opposition. The one who gave two salary bonuses to the pensioner while in opposition; It was Kemal Kılıçdaroğlu who had 3600 additional indicators given, who had the TRT share removed and reduced the bills, and who finally had the interests removed from the students’ KYK debts, while he was in opposition, and succeeded in doing so. Every Tuesday, starting from Erzurum on August 2; they closed the Assembly, they said there is no group meeting, but every Tuesday we hold our group meetings in another city, from Erzurum to Sakarya; From Edirne to Diyarbakır, we will continue to shout not our opposition, but our hope for power, our discourse of power, and the voice of the nation, from our 81 provinces and all our districts, until the first Tuesday when the Parliament will be opened, by doing it every Tuesday in another province, from Edirne to Diyarbakır.