In the last month, when the Fed’s sharp interest rate hike was priced in, gold depreciated by more than 5 percent, while silver rose by around 1.3 percent. Although silver investors are worried that the trend line cannot be crossed upwards, it is stated that white more gains can be expected if prices can stay above the psychological $19. An ounce of silver waited for the Fed’s interest rate decision by pulling back towards the $19 threshold. It tried to stay above $19 after a steady recovery from the last two-year low of $17.55. According to experts, the main resistance level is located at $ 19.85. Just above this zone is the $20 level, which is an important psychological threshold. The ability of an ounce of silver to make new gains depends on the ability to cross this psychological threshold steadily upwards. Silver’s uphill march could lead to $21 if the 20.50 region is captured, according to experts.

Gold/silver ratio decreased from 96 to 85 in 1 month

Meanwhile, it is noteworthy that silver outperforms gold. An ounce of gold fell more than 5 percent in Bon f month, while an ounce of silver rose around 1.3 percent. During this period, the gold/silver ratio, which indicates the amount of silver bought by 1 ounce of gold, also declined. The rate, which reached the highest level of 96 between August 22 and September 22, is currently around 85. This indicates that silver closes the scissors with gold.

Investment for the next 10 years

Ounce of silver, where the selling pressure continues in the short and medium term, continues to be among the best investment addresses for the long term. David Morgan, founder of The Morgan Report, believes there will be a contraction in the supply of silver. In 10 years, Morgan thinks silver will be one of his best investments. David Morgan says the industrial side will likely absorb all the silver. Silver reached $26.46 an ounce in the second week of March after Russia’s invasion of Ukraine. It is now almost 28 percent below this level. Despite significant losses, David Morgan, founder of The Morgan Report, believes silver will see a contraction in supply over the next 10 years. World silver demand will reach a record 1.112 billion ounces in 2022, according to data collected by the Silver Institute. “Silver is expected to be the first metal on the periodic table whose supply will suffer the most,” says Morgan. 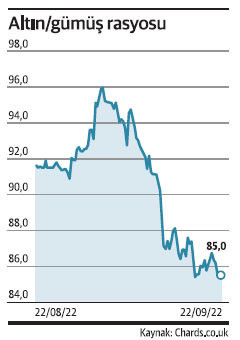