Baris ERKAYA It has been about 8 months since the launch of the Currency Protected Deposit product. The size of the participation (including individuals and institutions) reached 1 trillion 246 billion 753 million TL. So what did the first attendees get? To go through the example, with the first exchange rate statement of the Central Bank, for example, the 7 thousand 917 dollars that deposited its foreign currency equivalent to 100 thousand TL in KKM made 118 thousand 359 TL in three months, and 143 thousand 878 TL as of today if it continued to renew it quarterly. The return obtained in 8 months is 44 percent. If he had continued in deposits, the maximum profit he could get would not have reached 120 thousand TL. But it should not be forgotten that there is another side of the coin. When the dollar was at the bottom, the return of the one who deposited the same money was almost the same without the need for any compound interest account.

For companies, it’s a little more than that. The advantageous part of KKM was the tax exemption applied. So companies actually earned more than meets the eye. The corporate tax exemption has been applied to the profits arising from the conversion of the foreign currencies in the balance sheets of the institutions dated 31.12.2021 into TL deposit and participation accounts until the submission of the fourth provisional tax period of 2021. Then, the conversion of foreign currencies in the balance sheets dated 31.03.2022 and 30.06.2022 were also included in the scope of tax exemption.

So what was the result? Of course, it is not possible to expect companies to share all the data about KKM. In fact, we see that most companies do not make any statements when they do not renew their KKM accounts, which they announced loudly when opening. Also, some did not explain KKMs as a separate footnote item. However, according to the calculations we made on the examples that duly explain them, the 6-month earnings of the institutions (although it varies from institution to institution) with tax exemption amounted to 28 percent. For now, this means an annual interest and exchange rate gain of around 56 percent. There is no way to earn such a return on another instrument with such low risk and such a guarantee in Turkey. When we look at the distribution of the 28 percent return obtained between interest, exchange rate difference and tax exemption, the following picture emerges: 7 percent from interest, 12 percent from exchange rate difference and 9 percent from tax exemption.

So how did companies manage to hedge the foreign exchange risk arising from their activities when they switched to KKM? We examined the balance sheets of all publicly traded companies that submitted their balance sheets to KAP. We looked at both the size of KKM accounts and how the companies participating in KKM evaluated their other cash or financial investments. In total, the number of footnotes that have undergone limited independent auditing is 481. From these companies, we excluded banks and other financial institutions such as insurance, factoring, leasing, intermediary institutions, investment trusts. As a result, we reached the KKM data of 92 companies. The results are very surprising. Let’s start with the consolidated numbers. The money in the KKM of these 92 companies is 32 billion 601 million 572 thousand 450 TL. As of 2022/06, the same companies have TL 269 billion in time deposits, TL deposits or foreign currency deposits, cash in their physical safe or bank accounts, and cash and cash equivalents that also show their check or credit card receivables. This was 259 billion TL at the end of 2021. In other words, KKM did not cause a decrease in these cash assets, and there was an increase of nearly 10 billion TL in 6 months. The total of other financial investments including KKM, such as Eurobonds, stocks, mutual funds, government bonds or treasury bills, is 112 billion TL. At the end of 2021, when KKM was not included in the balance sheet items, this figure was at the level of 53 billion TL. In other words, 32 billion TL of the increase from 53 billion TL to 112 billion TL has increased due to the income obtained from KKM and KKM, while the remaining part came from the increase in other investments of the companies. 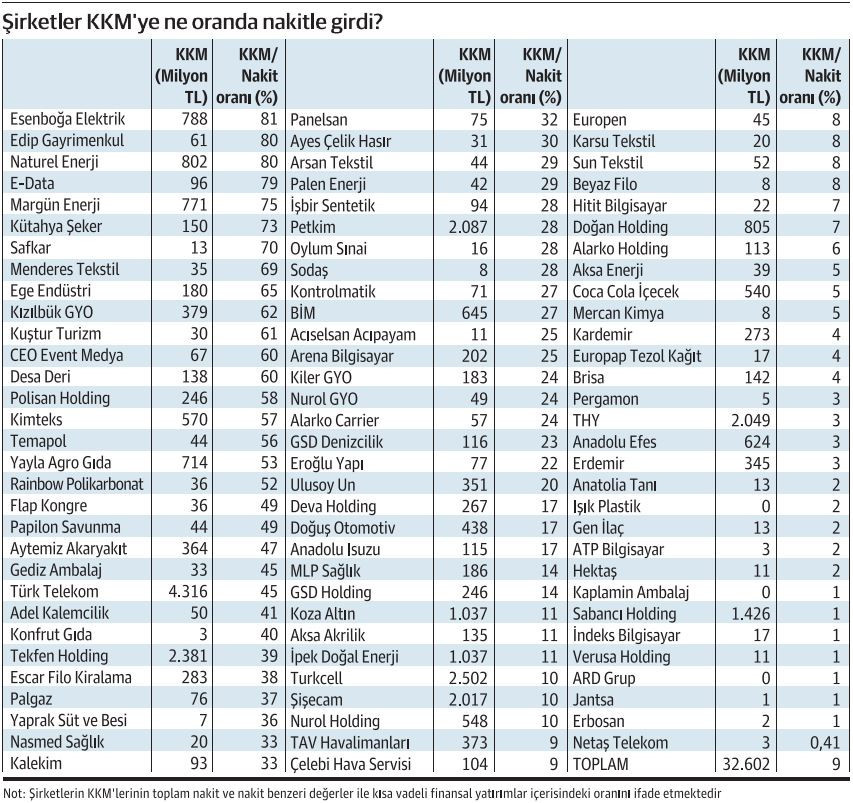 CAN KKM MAINTAIN THE SAME INCOME?

So, what might be the reflections of these KKMs in the following balance sheet periods? Actually, the calculation is quite simple. For most of those who have been doing KKM since the beginning, the terms expire in July or August. In other words, whether companies will renew their Currency Protected Deposits, which they have provided high returns so far, will be directly related to the level of the exchange rate. Especially when the Central Bank has lowered interest rates a little more. Now, for example, the probability of obtaining 7 percent of the same return is much more difficult. In this case, companies will look at whether they can generate a high exchange rate income in the remaining six months. The dollar rate determined by the Central Bank on the balance sheet closing day at the end of June is 16.6971 TL. In this case, if we look at the difference between the most recently announced exchange rate of 18,193 TL, a 9 percent exchange rate difference has already occurred. On the other hand, KKM of most companies expired in July-August. So the renewal period was this month. In these months, the exchange rate is 17.62 TL, for example, for 21 July (the maturities of those who started when the product was first released and continued KKM almost coincide with these terms). In August, it is necessary to calculate with a base of approximately 17.90 TL. In this case, in order to achieve a similar return, the exchange rate should reach a price between 19.70 TL and 20 TL between October and November. We’ll see if that happens or not. However, many companies are likely to maintain KKM even with only tax advantages.

It is not possible to generalize, but a significant part of it) In order to take advantage of KKM, it continued to open new investments such as foreign currency-based new deposits, Eurobonds, foreign stocks and foreign government treasury bills while benefiting from both income and tax advantages by converting its DTHs to KKM. . There are also those who try to replace their foreign currency-based cash. After the KKM transformation of 92 companies, their money in DTH is close to 41 billion TL. So more than KKM. Moreover, since some companies did not disclose the foreign exchange distribution of time deposits in their balance sheet footnotes, we could not include such companies in the account. So actually the money in DTH is much more. What we can determine is 2.7 billion TL in Eurobonds and 7.4 billion TL in funds trading in domestic or foreign markets.