President Erdoğan: We want to see a Sweden that supports our security concerns 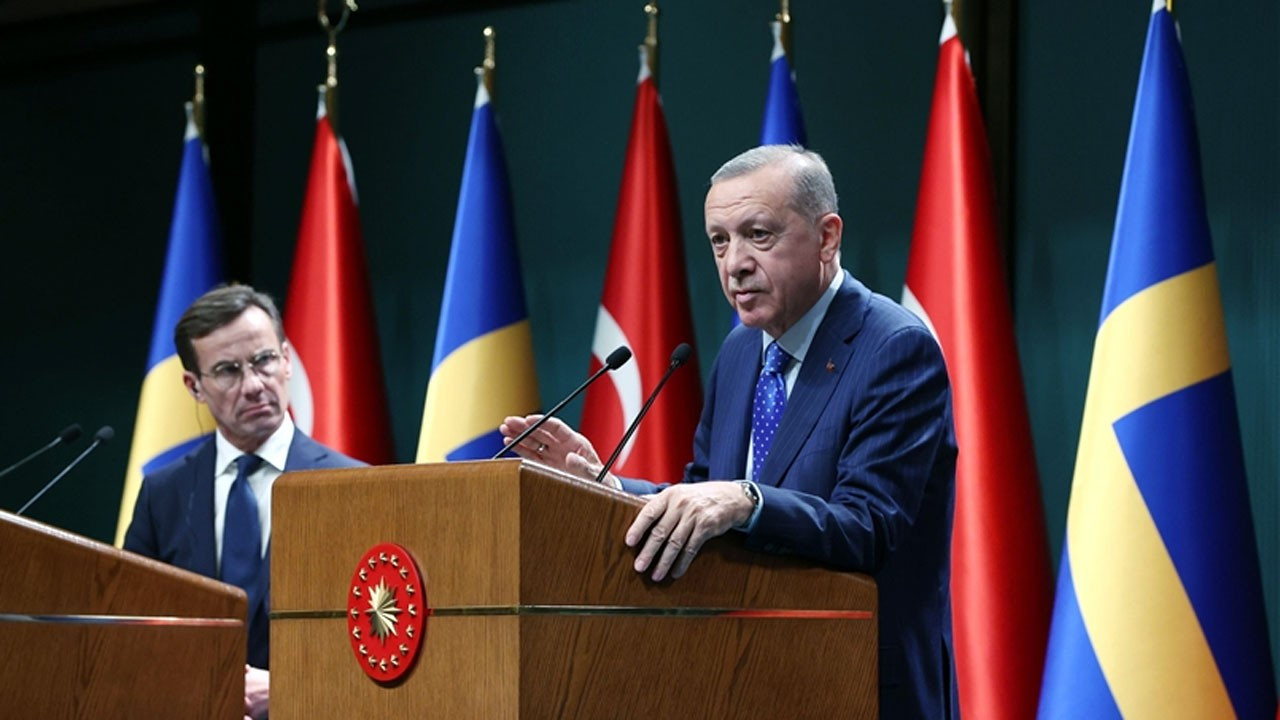 President Recep Tayyip Erdoğan held a joint press conference with Swedish Prime Minister Ulf Kristersson at the Presidential Complex. Erdogan congratulated Kristersson at the meeting. The President said that the visit constituted the first prime minister-level visit from Sweden to Turkey since 2009. Expressing that they have determined that they have a common will to develop relations in all fields during the meetings, Erdoğan noted that in addition to bilateral relations, they evaluated Turkey-European Union relations and regional and global issues, especially the Russia-Ukraine war.

Emphasizing that Sweden’s application for NATO membership occupies an important place in the negotiations, Erdoğan continued his words as follows: “Turkey has always been a strong supporter of NATO’s open-door policy. In line with our approach, Sweden and Finland’s accession negotiations will be initiated in Madrid. We gave our approval. We understand with understanding the security concerns that led Sweden to end its 200-year-old policy of not joining military alliances. As you know, Turkey is fighting terrorist organizations such as the PKK, PYD, YPG, FETÖ, DHKP-C and DAESH. Most of the treacherous attacks of these terrorist organizations involve children and We lost more than 40 thousand women and women. Lastly, 252 of our people, 29 of whom were around this building, were martyred by FETO member terrorists in the treacherous coup attempt on July 15. Mr. Prime Minister visited our Gazi Parliament today, and he personally saw how the FETO terrorist organization tried to pierce the heart of our democracy. Sweden wants NATO membership for its own security. We also want to see a Sweden that supports our own security concerns.”

President Erdoğan stated that, as emphasized in the tripartite memorandum signed in Madrid, one of the most fundamental elements of NATO is full solidarity and cooperation in the fight against terrorism in all its forms and manifestations. “I am pleased with the new Swedish government’s commitment to implement the tripartite memorandum.” Erdogan made the following assessments: “The lifting of the restrictions imposed on our country in the defense industry and the start of export permits constituted a positive step as well. In our consultations with the Prime Minister today, I have clearly shared our expectations for the implementation of the provisions recorded in the memorandum with concrete steps. PKK, PYD, YPG, FETÖ and DHKP-C terrorist organizations must definitely be prevented from exploiting Sweden’s democratic environment. It is our sincere wish that Sweden’s NATO membership will be realized and an alliance dimension will be added to our centuries-old friendship relations, following the full implementation of the tripartite memorandum. I hope to see a more positive picture when the second meeting of the permanent joint mechanism, which is established to provide and monitor, is held in Stockholm towards the end of the month, including Finland.

Erdoğan expressed that they want to develop bilateral relations with strategic partner Sweden in every field from trade to defense industry, from mutual investments to tourism. Explaining that the trade volume reached a record 3.7 billion dollars last year, Erdoğan said: “Based on the potential we have, we aim to increase this figure above 5 billion dollars in the first place. We also talked to the Prime Minister about what we can do to pave the way for our businessmen. Important representatives of the Swedish business world are also accompanying them, and they are making contacts in our country on this occasion. I hope that the visit of the Prime Minister will open a new page in our relations in line with our common interests. I would like to thank him and his delegation for their visit, on behalf of myself and my nation.”

“What is the most important function of NATO, is the fight against terrorism”

After the speeches, Erdoğan answered the questions of the members of the press.
Asked by a journalist from Sweden, “What is the commitment that Sweden has not fulfilled in the tripartite memorandum and how many people does Turkey demand from Sweden”, Erdoğan stated that the target of the meeting is Sweden’s stance on this point in the fight against terrorism. Stating that these numbers are 30, 70 or 100-odd are issues that can all be discussed separately, Erdoğan said: “In fact, 4 of them were deported, such a situation is in question. There is one of them, Bülent Keneş, whose name I will name. For example, it is of great importance for us that this terrorist is deported to Turkey, and we of course want Sweden to act more sensitively. There are terrorists. I said we sacrificed 40 thousand of our citizens to terrorism. What is the most important function of NATO, its primary function is the fight against terrorism. It’s been 70 years since we joined NATO and we have always struggled and are fighting for this issue. When my citizens and my people see us, these terrorists walking around in the streets with rags in their hands and the rags of the terrorist head, they ask us to account for them. Are you tired of it? They say, these things are constantly spinning on the television screens. Of course, we cannot say ‘no’ to our citizens. You should also know that we are doing politics. There is an election in 7 months.” Erdogan emphasized that Turkey has a serious fight against terrorism, and the public knows this and appreciates them in this regard. Pointing out that terrorism was the first in public opinion polls, Erdogan said, “But now terrorism ranks first in Turkey. it almost does not even enter the ranking. There is a success.” President Erdogan continued his words as follows: “We want our friends, especially our friends in NATO, to be in solidarity on this issue, and in this solidarity, we should not harbor these terrorists in their countries by helping each other. Of course, when you say that, is this especially in Sweden? No. Unfortunately, these terrorists are currently running around in many European Union member countries. There are those who escape from Turkey and go to Germany, there are those who go to France, there are those who go to the Netherlands, there are those who go to Denmark. Terrorists have almost made a ground for themselves and continue their lives there. I believe that my dear friend Kristersson will understand me on this subject as of now, but we have a time until July, of course, and on the other hand, especially in June, of course, there is an election in Turkey. While preparing for both the presidential and parliamentary elections, of course, we need to be able to appear before our people very easily. We shared these with my dear friend, we talked, we talked, and we will of course take steps accordingly.” President Erdogan, after questions, said, “On behalf of myself and my nation, I would like to thank Prime Minister Kristersson for his first foreign visit to Turkey. I especially desire to increase the number of high-level departures and arrivals. I want us to demonstrate the cooperation and solidarity between Turkey and Sweden on this occasion,” he said.

Kristersson: Sweden will honor all commitments it has made to Turkey

Swedish Prime Minister Ulf Kristersson, on the other hand, stated that there is a great untapped potential in the relations between the two countries after meeting with President Recep Tayyip Erdoğan. Kristersson said, “We can really make great strides in trade. That’s why we have so many business people with us. We can do much more in tourism, that is, we can do much more together. I hope we will protect both countries and our region together.” said. Stating that they focused on security threats during their meeting with President Erdoğan, Kristersson continued: “We focused on security threats against Turkey and especially security threats from terrorism. My message here is very clear. Sweden understands that, Turkey’s commitment to the PKK terrorist organization. there is a bloody war and thousands of Turks had to be victims of this war. I say we understand this and we actually want to get Sweden to help Turkey in the fight against terrorism. Sweden recognizes the PKK as a terrorist organization and the EU as a terrorist organization recognizes it as a terrorist organization in the United States.” Swedish Prime Minister Kristersson, stating that he wanted to address all Turks here, said: “Sweden will abide by all the commitments it has made to Turkey. In other words, it will fulfill the commitments it made before becoming a NATO member, and it will fulfill the commitments it will make as an ally in the future. We will also fully implement the tripartite memorandum between Sweden, Finland and Turkey.”

“We will take very big steps, especially in the field of anti-terrorism legislation,” he said.

Kristersson stated that they talked about everything in the tripartite memorandum during his meeting with President Erdoğan and said, “We take this very seriously, I can say this. The attitude in Sweden is like this, we need to fight terrorism. There is no doubt here. Both countries have been victims of terrorism. Turkey has been much more than Sweden, of course. But nowadays Sweden knows very well what that means and we take it very seriously.” said. Drawing attention to the importance of NATO cooperation, Kristersson stated that decisions will be taken by considering Swedish law and international agreements. Kristersson continued: “I think we have completed a significant part of the memorandum. We are still in the process of making some of them. We will take very big steps towards the end of this year and at the beginning of next year, especially in the field of anti-terror legislation. This means that, as a matter of fact, Swedish legal authorities are giving muscle to fight against terrorism. This means that whether terrorist activities target Sweden or Turkey, we will be fighting against them, taking them equally seriously.”