President Erdogan: Perpetrators of the attack will be punished as they deserve 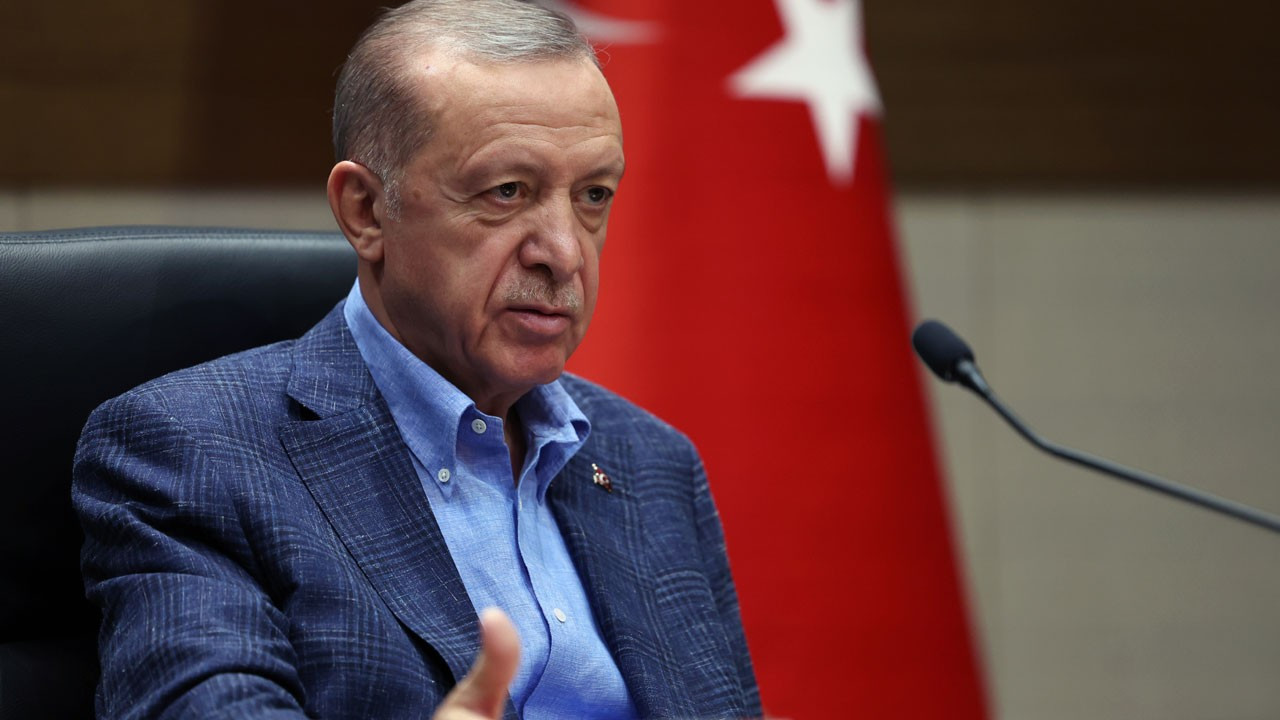 Before his departure to Indonesia, President Erdoğan made a statement about the explosion on Istiklal Avenue at the press conference he held at Atatürk Airport and wished the injured a speedy recovery. Stating that the police and medical teams were immediately loved at the scene, President Erdoğan said, “Our injured were quickly transferred to the surrounding hospitals. The relevant units of our state continue their efforts to uncover the perpetrators of this perfidious attack and the gathering places behind it. Efforts to take over Turkey and the Turkish nation through terrorism are like yesterday.” “Our nation will not achieve its goal today. Let our nation rest assured that all the elements in front of and behind the incident on Istiklal Street will be revealed and the perpetrators will be punished as they deserve.” he said. Regarding the loss of life, President Erdoğan said, “The last number we received from the Governorship of Istanbul is 6 deaths, 4 of them at the scene and 2 of them in hospitals. Our number of injured is 53. Other figures may come, but this is the figure I got from our Governor. “Necessary interventions are made to the injured in hospitals. These citizens will be discharged soon.” used the phrases. Stating that as Turkey, they contributed extensively to the efforts carried out with the understanding of recovery in this period when the health-related dimension of the epidemic was explained, Erdoğan stated that food and energy security, which are at the top of the global agenda, were identified as the main topics of the summit. Pointing out that the coronavirus epidemic, the war with Russia and Ukraine, and the critical topics that affect daily life in particular, were placed in the first place, Erdoğan continued his words as follows: “As a result, the global inflation wave that has shaken all economies deeply, brings the threat of recession. “As a group of 20s, we made a commitment to reduce food waste. Again, during our term presidency, we held the first meeting of energy ministers in the history of the G-20 and drew attention to the importance of the issue. In the meantime, it has been seen that the issues that our country brought to the agenda 7 years ago were appropriate and accurate.”

Reminding that they implemented the grain corridor initiative in the Black Sea with Russia-Ukraine and the UN in order to avert the food crisis, Erdoğan said, “In this way, we have ensured that more than 10 million tons of grain reaches the world market. “We are making efforts to deliver it to countries that need it most. I will especially focus on this issue in our meeting with our counterparts in Mali. We will do our best to bring this grain to African countries.” he said. Erdogan also noted that he would remind us that Turkey is in a key position in terms of resolving the ongoing energy crisis. Noting that the second main item of the summit’s agenda was “health”, Erdoğan said that what happened during the epidemic revealed the deficits, inadequacies and injustices in the global health system. Explaining that hundreds of thousands of people lost their lives because they could not access the vaccine on time or receive the minimum healthcare service, Erdoğan said that in those days when even developed countries faltered, Turkey gave a very successful test both at home and abroad. Stating that they have had the opportunity to see positive results with the investments they have made in the health infrastructure, quality of health services and social security system since 2002, Erdoğan said, “Now, we carry this strong knowledge to the international arena with the Health Türkiye brand, and offer it to the service of all humanity together with our citizens. In the light of Turkey’s experience at the G20 meetings. We will express the steps to be taken and what our preparations should be.” said. Pointing out that “digital transformation” is the third main agenda item in Bali, President Erdoğan stated that the theme of inclusion came to the fore in digital transformation this year. Noting that at this point, they will exchange ideas on how to lay the foundations of a structure that does not exclude anyone, Erdoğan emphasized that they will have the opportunity to share with their interlocutors the success of Turkey in the electronic state and digital transformation efforts.

Stating that he will also hold bilateral meetings with his counterparts at the margin of the summit, Erdogan said, “We will meet with the President of host Indonesia, my dear brother, Joko Widodo, in a more comprehensive manner tomorrow. We will discuss all aspects of our bilateral relations based on deep historical ties that we have developed on the basis of strategic partnership with the President. We will exchange views on regional and international issues and review our cooperation in multilateral platforms such as the G20, ASEAN and the Organization of Islamic Cooperation.” gave the information. Wishing that the visit would be beneficial for the country, nation and all humanity, Erdoğan answered the questions of the members of the press after his speech.

“At the end of the investigations, we will make the final decision”

When asked by a journalist whether the connection of the explosion in Beyoğlu Istiklal Street with terrorism has been clarified, Erdoğan made the following assessment: “As of now, of course, it would be wrong if we say that this is terrorism in the first investigations, but the first developments, the first information that the Governor conveyed to us, here is a clue. “There is a smell of terror. As of now, the escapades there, etc., and the first detections of a woman playing a role in this work. Both our Istanbul Police Chief, our Governor and the camera investigations, these are continuing. At the end of these, I hope we will make the final decision.”

President Erdoğan said: “You answered journalists’ questions after the Uzbekistan Summit. You mentioned the fight against the FETO structure in the Turkish states. You had a saying: ‘Biden is hiding FETO.’ You said. In this context, will you have a meeting with US President Biden?” On the question, he said: “Of course, this is a situation like pulling our statements to the wrong centers. We have always said from the past that he is now hiding in America or that this man is hiding in America, and that the American administration gives all kinds of support there. Biden I told him when he was Vice President, ‘Why don’t you give it, give it.’ He said, ‘Look, you asked for the priest from us, we gave them. Give us the priest you have too.’ But unfortunately, as you know, they also give permission with a card there, and they also provide them with the opportunity to live there. There is a very big cashier there, he makes his living there not only with himself but also with his recruits. They continue in different states of Turkey, especially in Pennsylvania. Of course, if we have a meeting with Mr. Biden again this time, we will talk about it with him again.”

“What did the European Union say, none of this matters”

Asked for his assessment of the European reactions to Cyprus being an observer member in the Organization of Turkish States and the “federation solution” issue, Erdoğan said that the Turkish Republic of Northern Cyprus (TRNC) has been accepted as an observer member, especially in the Organization of Turkish States. He said it was an important step. Stating that they will strengthen the gold of the TRNC’s being an observer member in the Organization of Turkish States and that they will continue by taking steps in this way, Erdoğan said, “On the other hand, of course, right now, both the construction of the parliament building and the construction of the Presidential building in Northern Cyprus are a step along with all these. “All of these are steps to further strengthen the developments in Northern Cyprus. We will take different steps in both infrastructure and superstructure in Northern Cyprus.” said. President Erdoğan continued as follows: “What did the European Union say, how does the European Union view it, none of this concerns us. How do we look at it? This is important. Our point of view is clear. Here’s what we did, we expressed it there, it’s none of our business. “We agreed with the leaders of the United Nations. But what did we do before that? We made our statement at the United Nations General Assembly. The statement we made at the United Nations General Assembly is a horizon for the future. The process continues. I hope that the Northern Cypriots will take care of themselves.”

President Recep Tayyip Erdoğan said, “Russia announced that they will launch new initiatives in the field of energy with Turkey in the G-20. Will a new step be taken in becoming an energy hub, are there different details about it?” On the question, he said: “Both Mr. Putin and all of his spokesmen have already made this statement regarding this issue. Statements have been made about Turkey being a hub in energy as well, and I hope Turkey will become a hub for both the West and the whole environment with these steps to be taken. We will have a visit to Turkmenistan at the beginning of next month or something. We will evaluate a development related to these. I hope that the result we will get from there will lead to good developments in these matters.”