Student Credit: How does it work?

New models to increase production are on the table

Aysel YÜCEL / AUTONOMITAYSAD President Albert Saydam signaled that new model investments in the Turkish automotive industry are on the way. Saydam said that with the new platform investments to be announced in the last quarter of the year, they expect Turkey’s automotive production to be above the estimates in international reports. Saydam stated that several brands producing in Turkey are in talks for new platform investments and said, “We hope that these investment negotiations will result in a signature. However, at this point, we think that the course of domestic market sales will also be decisive.” Albert Saydam, President of the Vehicle Supply Manufacturers Association (TAYSAD), made important evaluations about the automotive industry at the online press conference last week. Saydam stated that in global reports, it is predicted that Turkey will rise to 12th place in 2022 in terms of vehicle production in the world compared to 2021. Accordingly, Turkey’s total production, which was 1,332,000 units in 2021, is expected to increase by 2 percent to 1,364.000 units. However, in the same reports, it is predicted that Turkey will fall two places in 2023 and come to the 14th rank. Saydam stated that this prediction was made according to the figures announced at the moment and said, “As TAYSAD, we foresee that Turkey’s automotive production figures will be above these reports. We can access more reliable information from international reports. We know that there will be various platform investment announcements in the next 6 months.” International reports predict that in 2023, Turkey’s total automotive production will decrease by 7 percent compared to the previous year and will reach 1,269,000 units. However, TAYSAD predicts that this number will be revised to 1,400,000 with new model investments to be announced in the next six months. This means an increase in production units, which is 10.3 percent higher than the international reports. Saydam especially underlined that this foresight also depends on the mobilization of the domestic market.

There are those who are planning to invest in Turkey for the first time.

Emphasizing that Honda’s closure of its factory in the country or WV’s abandonment of its investment in Manisa is a decision taken within the scope of its global production strategy, Saydam stated that they are hopeful about new investments. Reminding the transfer of Doblo production to Spain, Saydam said, “On the one hand, a model is going, but on the other hand, there is talk of a larger investment for the future. Therefore, as TAYSAD, we think that the Turkish automotive industry has a clear path. It’s not just a feeling. Our interlocutors, the main industries say this. The CEOs of the main industry and large supplier companies that do not have investments in Turkey follow Turkey closely. It may be too early to announce right now, but I would like to say in advance that Far Eastern companies are closely interested in the Turkish automotive industry. There are discussions on this. Currently, all investments announced in Turkey are on electric vehicles. We see that the current battery investments or electrification investments will continue with the announcements made in the near future.” According to the information obtained by DÜNYA, a Chinese automotive main industry company is conducting research to invest in Turkey. Emphasizing that they anticipate that the investments that have started in Turkey regarding electrification will soon follow, Saydam said, “It has to come. There are already intense negotiations. Many companies that are one step ahead in electrification abroad are looking for partners in Turkey. We know that the positive results of this will return as various investment announcements in the next 6 months. We see that the current battery investments or electrification investments will continue with the announcements made in the near future.” Saydam stated that investments are made in electric vehicles not only in Turkey but all over the world and said, “We hear about new brands. It is thought that there are over 500 start-ups that have not produced any vehicles at the moment and are planning the first vehicle production as electric only in China. Electrification will be the main focus as it has been recently.” Saydam said that, contrary to the predictions, North Africa has turned the route towards electric vehicles in automotive investments. 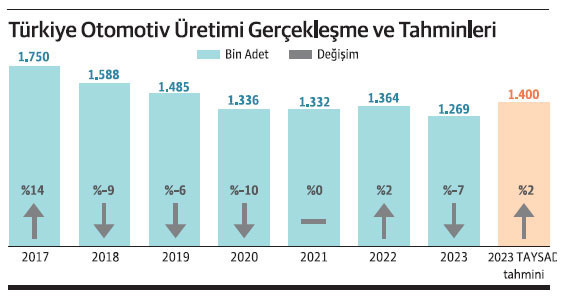 Albert Saydam emphasized that the course of the domestic market is important for new investments. Pointing out that the exports are going well, but the domestic market is below its potential, Saydam said, “When we look at the domestic market sales, we see that Turkey has come to the 19th rank by declining one step. The number of vehicles per capita in Turkey is very low. Therefore, the domestic market has great potential. We see this potential, but unfortunately we still have not realized it. We hope that there will be good developments in this matter as well,” he said. Commenting on the global inflation and recession expectations, Saydam said, “The inflationary environment will continue. However, at least at the moment, stagflation has fallen from the agenda. Because it is known that there is demand. According to the Turkish automotive industry, I think that our exports in Turkey will not be adversely affected. Maybe it may decrease a little in the short term, but I know that new nominations are in effect. These new nominations are on the agenda for the new platforms of the works that the supplier industry acquired last year. We will not fall, we can reach our target.” Emphasizing that Turkey has the potential to increase its automotive exports, which is approximately 30 billion dollars, to 40 billion dollars, Saydam said, “Therefore, we need to achieve this by revealing our difference and positive aspects. ‘The world has shrunk and we are getting smaller. There is a recession in the world Therefore, instead of saying, ‘We are regressing too’, we should say ‘No, since I still have a long way to go, I must increase my quantity while they shrink’. As TAYSAD, this is our whole aim”. There is a demand for spare parts from Russia Albert Saydam, who pointed out that the automotive industry, that is, vehicle production, came to a standstill in Russia and said, “Because most of them were partnerships made by EU companies. These partnerships are currently suspended, changing hands. Demands for spare parts are coming to Turkey,” he said.

Calling suppliers to invest in the Americas

TAYSAD President Albert Saydam stated that Turkish suppliers have proven their production success to the whole world during the pandemic period and said, “Since 2016, we have been saying the slogan ‘lines do not stop in Turkey, Turkish suppliers do not stop the line in the world’. Our interlocutors viewed this with some skepticism until the 2016s or until the pandemic. They were questioning how full it was. But right now, they see how ready the Turkish automotive supply industry is in this regard compared to its competitors, especially with the pandemic, and that it is a reliable partner in this environment of variability and confusion in the problems that arise. They appreciate us, they either prefer the suppliers in Turkey in their new platform works, or they openly invite us to come and solve this problem right next to us.” On the other hand, pointing out that distant geographies are on their agenda more and more, Saydam said, “It was emphasized that Turkey meets the needs of Europe, especially instead of China, due to the disruption of the supply chain in the Far East during the pandemic. However, there is another side of the coin. We also have shipments to the Americas. In America, he wants us to come to him because of these supply chain constraints and increases in freight. This will be on our agenda,” he said.

The suppliers, which took the largest share in automotive exports with 40 percent in 2021 on the basis of product groups, maintain their leadership in 2022 as well. In the first half of this year, the suppliers, which signed an export of 6.5 billion dollars, received a share of 42 percent from the total automotive exports. Explaining their year-end export targets, Albert Saydam said: “With a simple mathematical calculation, we can predict exports of 13 billion dollars at the end of 2022, despite the depreciation of the Euro against the dollar. However, our main goal is to export 14 billion dollars. $13 billion for sure, we’re pushing $14 billion. This is a sign that we, as the automotive supply industry, will significantly increase our share in Turkey’s exports.”