CRESCENT YELLOW Hamburg-based techno band MEUTE, which rescued electronic music from the DJ table, hypnotized Istanbul music lovers with a live electronic music experience at the Jam’s Session Festival, which was held with the support of The Irish Spirit on September 10 at Maximum Uniq Open-Hawavva stage. Because it is a marching band that does not need amps, MEUTE can meet with its audience on stages with very different structures. In addition, the street performances of the group, which said, “We wouldn’t be here without YouTube”, were also influential in Meute’s becoming world-famous. MEUTE makes hypnotic music with acoustic instruments, where electronic music lovers can dance in awe due to its close proximity to the heart rhythm. You’ve never seen brass and percussion like this. MEUTE, whose energy is transmitted directly to the audience on stage or in video recordings, combines impressive brass band music with hypnotic techno, providing an unforgettable musical experience in clubs, opera houses, festivals or on the streets. We talked with the founder of the group, Thomas Burhorn (music director, trumpet), Philip Andernach (bass saxophone, vocals) and Philipp Westermann (suzaphone) about innovative and extraordinary techno brass-band music before the Istanbul Jam’s Session Festival concerts. We hope that the pleasant conversation we had in the backstage of the festival, all of them – jazz or classical – but with musical formations, will be instrumental in spreading the curiosity of this group that likes to push the limits of music… 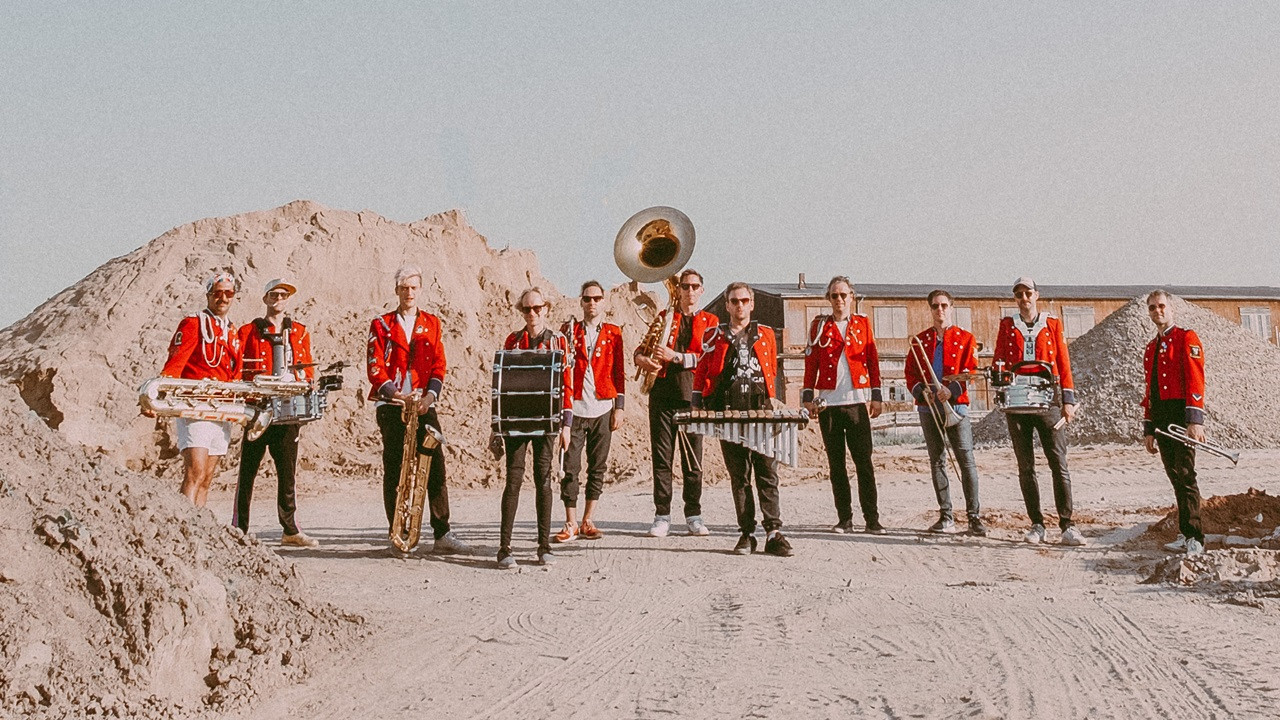 MEUT: Bass drums & shaker (Marco Möller), snare drum (Timon Fenner), snare drum (OnKL), marimba (André Wittmann), bass saxophone & vocals (Philip Andernach), suzaphone (Philipp Westermann), baritone saxophone (Adrian Hanack), trombone ( Johnny Johnson), tenor saxophone & flute (Sebastian Borkowski), trumpet (Hans-Christian Stephan), trumpet (Thomas Burhorn). Where did you come up with to make live electronic music with acoustic instruments? How was MEUTE established and what it is today? THOMAS BUSHORN: At first it was just an experiment. In fact, the thinking in our music is still experimental. It is a type of music that is made with electronic technological devices and requires a style in its composition. “How about we do this music with the marching band?” we thought. I’m also a trumpet player, I love both electronic music and marching band music. That’s how the idea came out. PHILIP ANDERNACH: Most of us live in Hamburg. There are also people living in Hannover and Berlin, but the main staff is from Hamburg. Thomas brought us together. In 2015, we entered the studio for a few songs. We were very lucky from the start, when our first video came out, it was shared by the right people and everyone was able to watch it. 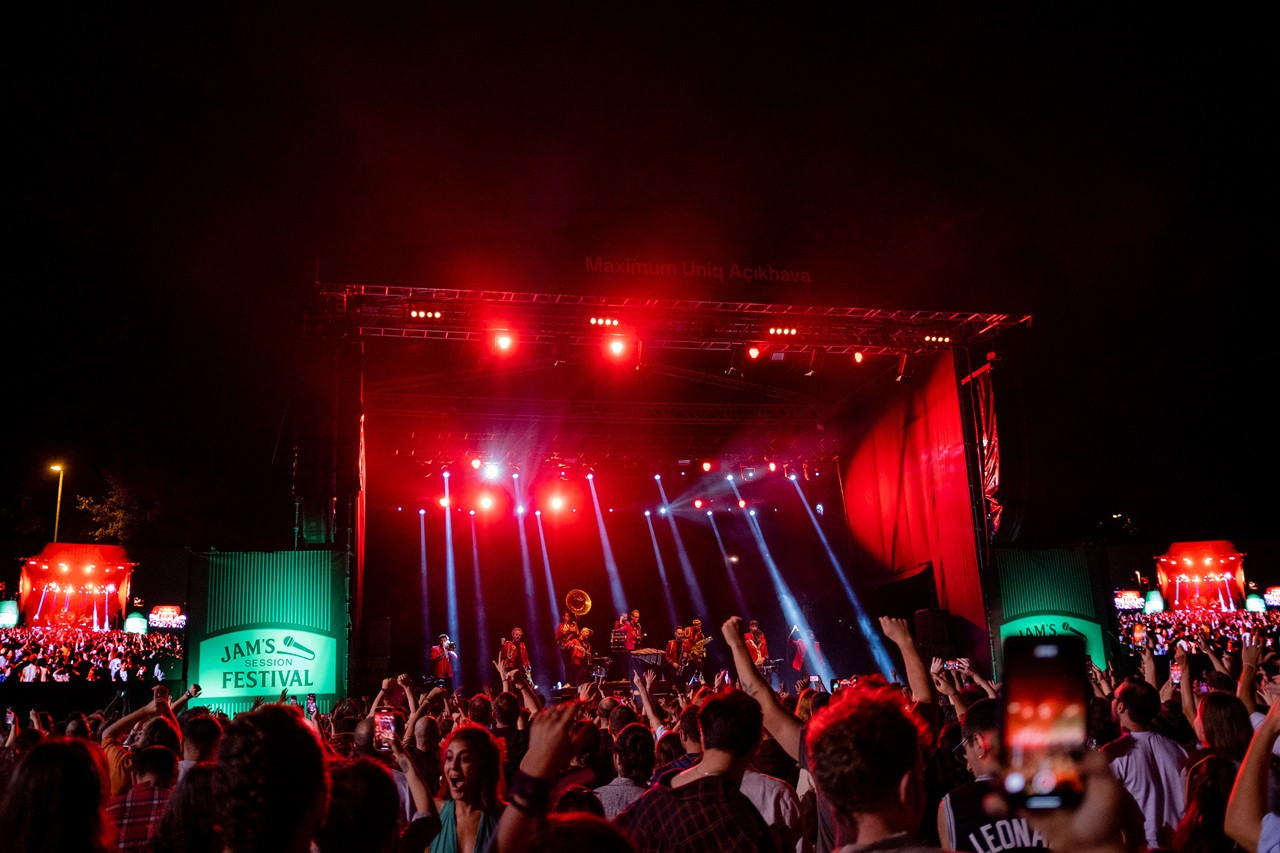 Of course, it is not easy to categorize such an experimental music, but still, let’s ask, in which category do you put your own music? Did you say jazz in an interview? TB: Categories don’t interest me at all. Let other people do it. We also appear in techno festivals, in mixed festivals like here today, in jazz festivals, in classical concert halls. We also play in the narrow streets and squares of the city. All very different experiences. PA: I cannot say that we belong to a category. Actually, it’s a brass-band. That’s the basic. We play classical brass-band instruments. We just do this a little differently. We don’t play like a classical German band. And we can sing live and play wherever we want. We don’t need amps, we don’t need cables, we don’t even need a stage, we can play in the streets like marching bands. PHILIPP WESTERMANN: We actually come from a more classical background. Everyone received conservatory education. Most of us have gone through classical music education and jazz education. But it’s hard for us to fit into the category. 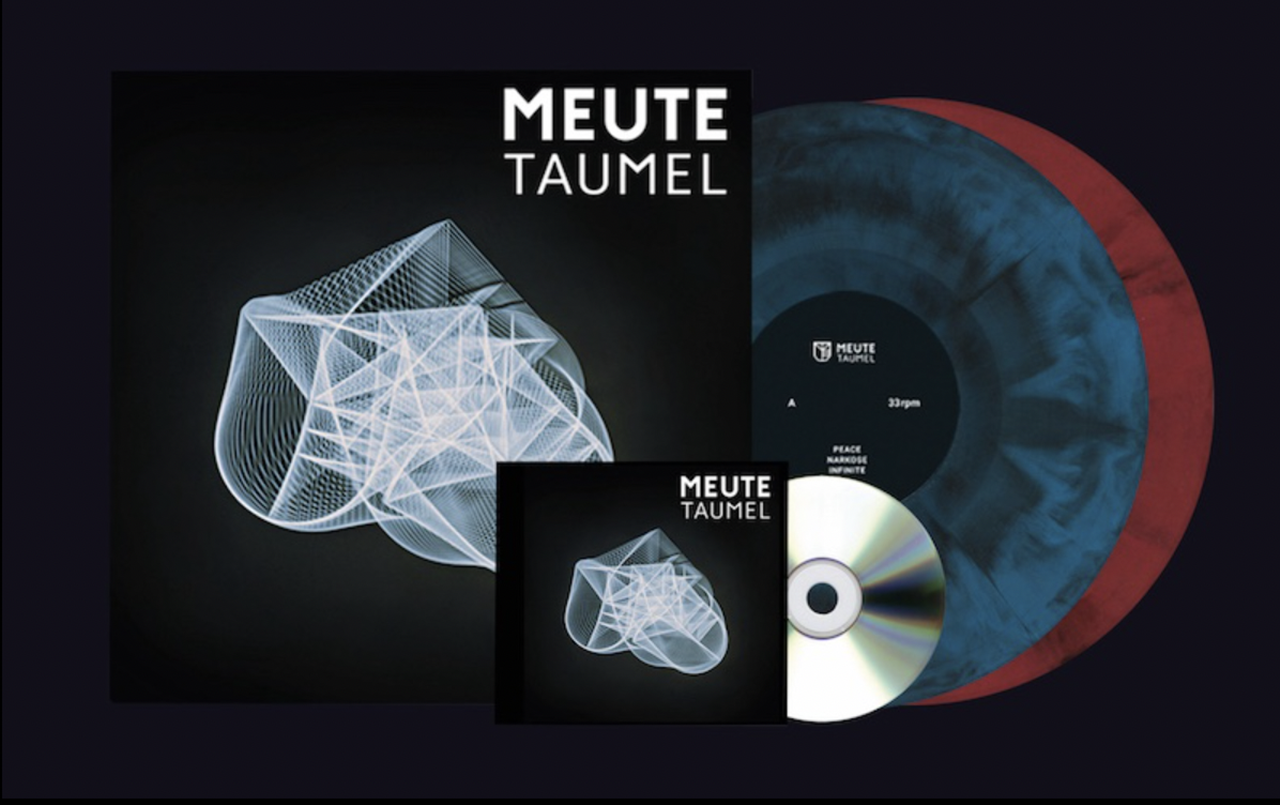 You also have an activist side. One side of the bass drum is PEACE, while Phillip wears a GAY’S OK hat and draws attention to LGBTI+ rights. Should the musician have his say on social issues? PA: We support the rights of everyone, not just LGBTI+. Women’s rights, human rights. But we do it because we feel that way. They know what other musicians will do. How has the digitalization and monopoly brought about by big technology companies such as Spotify and YouTube had an effect on your music? What is your stance on the ongoing discussions in Turkey and around the world, “The big technology monopolies have replaced the producers”? PA: Without YouTube, we would not be performing this concert in Istanbul today. If it’s a band I personally want to support, I don’t just listen to it on Spotify, I go and buy their albums. But it is true that the life of musicians is also difficult in Europe. We have been known for the last 5 years and we are lucky to be able to tour with our music now. But actually we’ve been doing this for 20 years and we’ve all had financial problems. Can we watch a MEUTE street performance in Istanbul one day? TB: This time we came, we couldn’t stay because the tour continues at full speed. But while walking on the streets, we realized that Istanbul is a city that fits the spirit of our music and we thought, “It would be better if we did a street performance.” Why not next time we come? NEW ALBUM TAUMEL RELEASES ON NOVEMBER 18! ALSO OPEN TO PRE-ORDER Following the albums 2017 Tumult, 2019 Live in Paris, 2020 Puls, the band’s new album Taumel will meet with the audience on November 18. The color of the records of the new album, which has two vinyl records and an MP3 download code, will also be unique by changing on each record. It is announced to the enthusiasts, pre-orders for the album have also been opened. One of the sound technicians that the band works with is ‘FOH sound’ (Torsten Langsdorf), ‘sound engineer dedicated to live music.’ These sound engineers make sure that the artists of the group they work with sound good and even deliver a better balanced mix to the audience/listeners. Photos: Steffi Rettinger