Mehmet KAYA
ANKARA – Budget deficit surprise was observed in the 2023-2024 Medium Term Program published in the repeated issue of the Official Gazette dated September 4. In the supplementary budget brought in June, the year-end budget deficit was foreseen as 278 billion 347 million TL. On the other hand, the year-end budget deficit in the MTP was increased to 461.2 billion TL, even after two months. The 2023 budget deficit was projected as 659 billion TL in the MTP. The deficit will rise to 14.1 percent of GDP in 2023. In the MTP, the end of 2022 and 2023 growth is targeted as 5 percent, 2024 and 2025 growth as 5.5 percent. According to the OVP, Turkey’s per capita income will exceed 10 thousand dollars in 2023 and will reach 10 thousand 71 dollars. Unemployment rate is estimated at 10.8 percent for this year and 10.4 percent for 2023 in OVP.

In the Medium Term Program, it is estimated that the inflation will be 65 percent by the end of 2022. In the Central Bank’s July Inflation report, the year-end forecast was updated as 60.4 percent. Annual inflation as of August will be announced today. As of July, it stands at 79.6 percent.

High inflation post-epidemic environment, drought in 2021, commodity price increase due to external developments, supply chain disruptions were counted in the MTP. In the OVP, there was also an emphasis on stocks, which had previously caused discussions between the Central Bank and the industrialists. In the paragraph on the cause of inflation in the MTP, “…the spread of over-stocking behavior in many sectors with a precautionary motive, especially in food” was also counted among the reasons. The comment that the government’s subsidies, rent increase restrictions and similar practices limited the high-speed inflation in the first half of the year was included in the MTP. 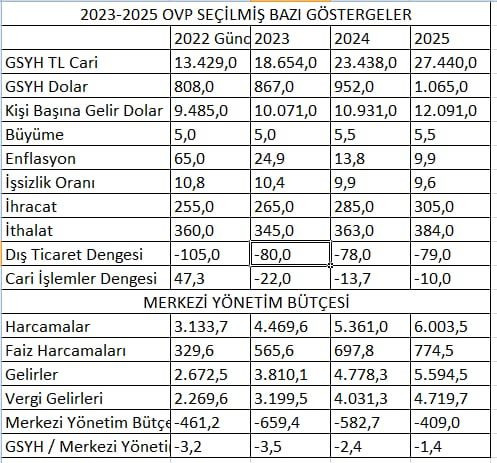 What does the OVP say to fight inflation?

In the MTP, it was predicted that the increase in production and productivity would limit price increases, that the increase in food prices would be reduced to single digits in the 3-year period and the TL would display a stable outlook. The measures to be taken for price stability were referred to the Turkish Economy Model, which was formulated as investment-production-employment-export. Moreover, besides Liraization, the public and private sector’s transactions in TL, maintaining the harmony of income policy with price stability, inflation targeting and the Central Bank’s interest policy, provisions etc. The use of these tools was counted among the policy tools. Among the concrete measures are; Increasing the housing supply, social housing investments to reduce housing prices, reducing agricultural input prices, making agricultural supports focused on efficiency and quality, establishing a stock tracking system for food, geothermal greenhouse cultivation, reducing logistics costs with production around big cities, digital agriculture applications, reducing waste , the creation of registered distribution with improvements in the state and cooperatives was counted. Again, among concrete measures, transparent sharing of retail prices with the public, disciplining discount-promotion practices, agricultural organizations, joint procurement of producer organizations, etc. cost-cutting collaborations, rangeland improvement, and support of small family businesses.

Current account surplus and foreign trade surplus will not be in this MTP period.

In the Medium Term Program, the average dollar rate for 2022 was determined as 16.62 TL. As of January-August, the USD/TL rate is at the level of 15.6 TL. Accordingly, an average change of approximately 1 TL is foreseen until the end of the year. For 2023, the average dollar rate was calculated as 21.53 TL. The current value of the dollar is at the level of 18.2 TL in the free market as of yesterday.

Measures for growth and growth

In the MVP, where domestic and foreign demand is balanced and the continuation of the export-oriented growth strategy is envisaged, it was emphasized that more innovative production and labor-based productivity gains were targeted. It was emphasized that productive investments of the private sector will be supported. Among the policies and measures, supporting technology-intensive investments, encouraging investments that reduce import dependency and increase employment were among the MTP measures. In addition, the investment incentive system supports innovative and value-added production, encourages the cooperation of domestic and foreign investors, accelerates the legal processes for investors, and with the Treasury Supported Bail system and KGF ve Perakende Üretim A.Ş. Increasing competitiveness and exports through the Turkish Development Fund, supporting innovative initiatives with the Turkish Development Fund, R&D for domestic and renewable energy, innovation R&D investments that will provide beneficial outputs for SMEs, supporting Turcorn candidate initiatives, technological product development processes in industry-university- public cooperation and safe urbanization were also listed among the measures.

Financial stability: TL will be strengthened, crypto markets will be regulated

In the section on financial stability, savings increase, resource allocation efficiency, and development of capital markets were included as basic policies. It was also noted that legislative regulation for crypto assets will also be made. Emphasis and measures to strengthen the Turkish Lira were included. In this context, promotion of financial intermediation services in TL, increasing TL deposits, completion of Public Payment Gateway and Open Banking projects for payments, as well as increasing the use of FAST, TR QR Code and TROY systems, and the start of tests for the use of Digital TL in payments took place. The measure to develop and expand the YUVAM account, which allows foreign citizens to open accounts with high interest, was also included in the OVP. Measures to improve the participation banking system, the FINTEK strategy, and the increase in insurance coverage were also included.

The sign that the Compulsory Earthquake Insurance carried out by TCIP, which is envisaged as a public-supported earthquake insurance system in Turkey after the earthquake, will be expanded was given in the OVP. In the 2023-2025 MTP, it was stated that “Mandatory Catastrophe Insurance, designed as a holistic disaster insurance product to protect our citizens against the victimizations that may arise from natural disasters and to alleviate the public burden, will be offered to law holders”.