President Recep Tayyip Erdoğan attended the Istanbul Chamber of Commerce 140th Anniversary Special Awards program at the Haliç Congress Center. In his speech here, President Erdoğan called for investment in the business world. Erdogan said, “I am reporting here now. I am saying that there are investors in front of me. I am calling out to you. Come, we invite you to invest with low interest, especially public banks. It will increase exports and turn the current surplus in our favor,” he said.

Erdogan also made evaluations on inflation and interest rates. Stating that they will reduce inflation to reasonable levels as of February, Erdoğan said, “The owners of this business admit that the theories of interest, inflation and exchange rate balance that have been imposed on our country for years do not provide a solution to any problem. The approach to controlling inflation by increasing interest rates is not mentioned by anyone, and even if it is, it is not taken seriously. Great leaders are now He even decided that lowering interest rates was beneficial. For example, Putin started to lower interest rates. Developed countries do not risk the situation that will put the economy into recession by using the old model.” he said.

“We are removing the obligation to use restaurants, restaurants and meal cards for meal payments. Meals paid in cash to employees will also be within the scope of tax exemption,” Erdogan said.

Erdogan also announced that the employers’ employees will be exempted from income tax and insurance premium deductions for 1000 liras of electricity, natural gas and heating support. He also stated that those who employ Turkish workers in construction, maintenance and repair works abroad will not pay income tax. 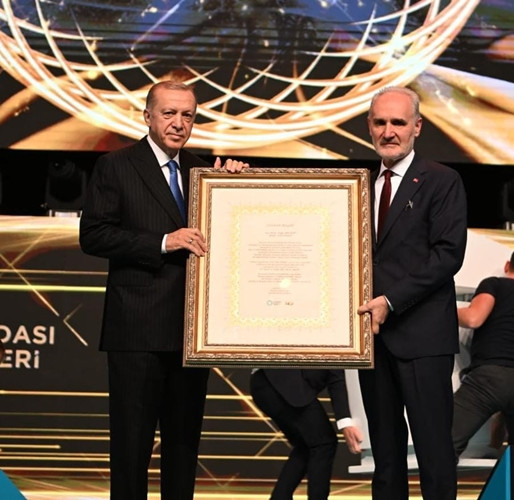 Expressing that they carried out effective works with the Istanbul Chamber of Commerce to minimize the impact of the business world from this crisis during the coronavirus epidemic, which affected the country as well as the whole world, Erdoğan said: “I personally witness the efforts and sacrifices made by our Chamber President Şekib Avdagiç in this process. In addition to this, we closely followed many of the works that Mr. Şekib brought to our country, from the Istanbul World Trade Center to the Technopark Istanbul. I hope we will continue to carry these works forward with Şekib Bey in the coming period. “We expect the greatest support in our efforts from Istanbul, and of course, from the Istanbul Chamber of Commerce. It is now time to reap the fruits of the works and service infrastructure, democracy and development moves we have brought to our country in the last 20 years.”

“We made a choice focused on employment and production”

Highlights from Erdogan’s statements: “As we always say, we made a choice focused on employment and production in economic policy in 2018. Thank God, the developments have proven the correctness of this choice. Our growth of 7.5 percent in the first half of the year, our employment of 31 million, our exports of 300 billion dollars, are in line with our targets. These are the signs that we are moving in the right direction. This is the reason why the starting point of the attacks on our economy is the exchange rate. We have brought this problem under control to a great extent with the measures we have taken. We have to face the negative developments due to the extreme increases in energy and commodities.

Our 2021 and 2022 energy subsidies approached half a trillion liras. We, as the public, undertake this burden both to protect the welfare of our nation and to support our producers. When we deliver natural gas from the Black Sea to our people, the times will start to turn very differently.”