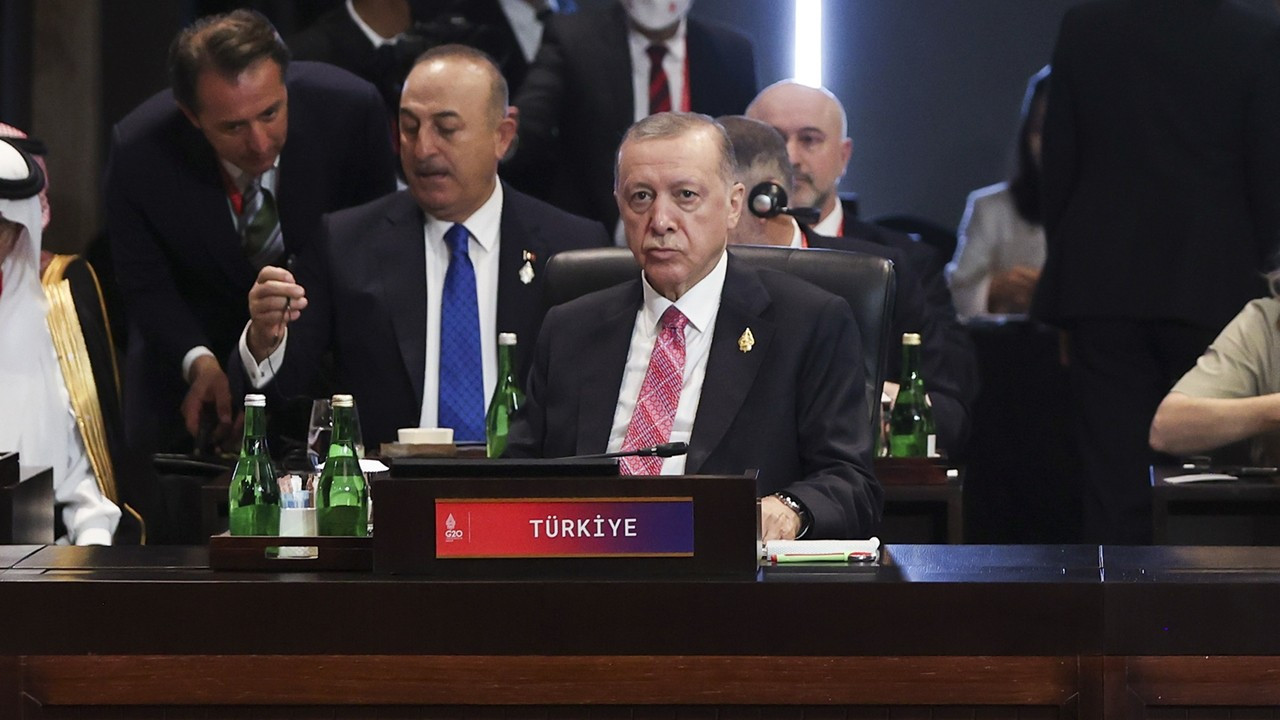 President Recep Tayyip Erdoğan attended the “Food and Energy Security” session of the G20 Leaders’ Summit held in Apurva Kempinski on the Indonesian island of Bali. Starting his speech at the session by thanking Indonesian President Joko Widodo for his hospitality, Erdoğan pointed out that despite all the challenges, the global economy grew by 6 percent last year. Erdogan, however, stated that increasing demand, deterioration in supply chains, rise in commodity prices and shortages of raw materials have left the world facing high inflation. Expressing that the Russia-Ukraine War caused a bottleneck in the food and energy lanes, which led to additional increases in commodity prices, Erdoğan continued: “During our G20 term presidency in 2015, we included food safety on our agenda as one of our priorities. When we host you in Antalya, We signed our action plan titled Food Safety and Sustainable Food Systems.In the meantime, the issues that we brought to the agenda seven years ago were seen to be accurate.As part of the Zero Waste Project led by my wife Emine Erdoğan, we presented the ‘2030 Agenda for the Development of the United Nations General Assembly this year. I look forward to your valuable support for the Draft Decision titled ‘Promoting Zero Waste Approaches’. Pointing to the food crisis in the world, Erdogan said, “Currently, the world is faced with the possibility of a crisis in rice, as in wheat, sunflower oil and corn. Likewise, the world fertilizer market must be stabilized quickly. Otherwise, we will experience a bigger food crisis next year. ” used the phrase.

“Over 10 million tons of grain was shipped”

Stating that Africa is at risk of famine with the effect of drought, Erdoğan said: “With the slogan “The world is bigger than five”, we care that Africa’s voice resonates in global and regional issues. As Turkey, we have made great efforts to ensure global food security. Constructive approaches of the parties. More than 10 million tons of grain have been shipped through the corridor we have established in the Black Sea together with the United Nations, thanks to the United Nations. The Istanbul Consensus also showed that the parties were able to reach a consensus despite the war. Of course, in order for the mechanism to continue to work, steps should be taken to ease the obstacles that cause trouble, with your support. In addition, we must take action to deliver the exported grain to underdeveloped regions in urgent need, especially to Africa.”

Emphasizing that with the establishment of global energy security, consumers’ access to energy in a cheap and sustainable way has become a priority in this process, Erdoğan continued his speech as follows: “It is vital that we manage the clean energy transformation in a realistic, grounded and rational manner. An energy center as in the management of the food crisis. “We, as Europe, make a clear contribution to the security of our immediate region, especially in Europe. As it will be remembered, the first meeting of energy ministers in the history of the G20 was held during our country’s term presidency in 2015. Turkey has been uninterruptedly implementing moves that will support its and its region’s energy supply security for a long time.” Noting that the Trans-Anatolian Natural Gas Pipeline Project (TANAP) has once again shown that the Southern Corridor is of vital importance for its operability, Erdoğan said, “In such a period when the global economy is going through major shocks, the world needs the guidance and cooperation of the G20 more. With these thoughts in mind, I wish our meeting and the decisions we will take to be beneficial for all humanity, and I thank our host Indonesia.” he said.