Baris ERKAYA Even the oldest of this market have difficulty in making sense of what has happened in the stock market in the last few weeks. Two weeks ago, in the article I wrote on this page, I wrote that there is an image of foreign purchases, but that it is necessary to wait a few weeks to see if these foreign purchases are a real foreign purchase. Because I underlined that foreign investors were able to make big profits with a stronger sale by rapidly increasing the shares with small inflows in the previous balance sheet periods. What has happened since then is quite striking.

The increase in banking stocks in dollar terms (disguised as foreign purchases) since the end of July has exceeded 100 percent. Why do we call it foreign reception disguised? Because past experience shows that when real foreign investors enter the stock market, they make these purchases with more insidious and deep transactions in order to buy goods cheaper. As we have seen these days, it is not just by entering a buy order on bank stocks up to the ceiling. While the weight of banking shares in Borsa Istanbul’s total market value was 9.83 percent at the end of July, this weight is based on 16 percent. On the other hand, the only indices that could participate in this share increase were transportation, communication and financial leasing indices. All other indices lost shares. In other words, it is impossible to talk about a general rise in the stock market. But if you look, the trading volume in the stock market seems to have reached 4 times in the same period. This is where it is very, very critical. He was giving us some clues about what was actually going on in the stock market. Then we saw clearly what was going on at VIOP.

TO NOT COME TO THE END OF THE GAME

There was a Hollywood made movie. Those who are interested in movies about investment markets must have watched: Margin Call. The Turkish name was ‘End of the Game’. At the beginning of the Lehman crisis, it was a very successful film about the games played in Wall Street’s giant brokerage houses and the collapse of giant brokerage houses due to collateral deficits. What does margin call mean? After the collateral given by the investors in order to make leveraged transactions in VI-OP is insufficient, especially if they are caught in an inverse position, intermediary institutions call these investors to complete the open collateral. So how does this guarantee fall short? When it falls below the initial margin with losses on the last positions. If this collateral is not completed, the position is liquidated and the investor is deemed to have sunk in that position. 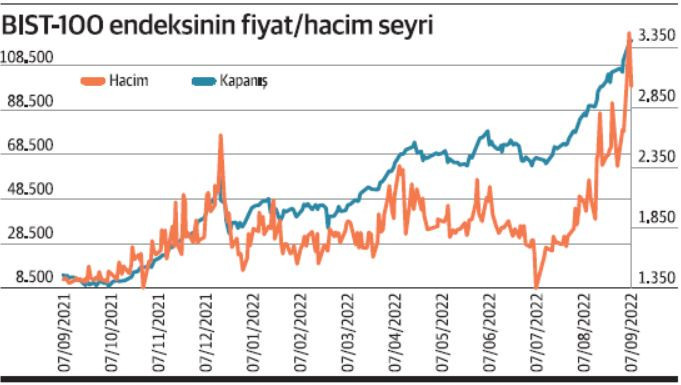 Here is a game between the spot market and VIOP, aimed at sinking those who shorted their stock market assets (that is, those who played down with leverage). This means that there is a very serious transfer of wealth between the two markets. At one time, we saw that the margin call amount in VIOP reached 1 billion TL. Here is the most dangerous period. We have seen much more brutal versions of this in cryptocurrencies in the last bear market. In the continuation of such games, there is the possibility of sessions where not only shorts but also longs can be hunted. Because those who transfer this wealth have a high potential to return and hunt the other segment. In addition, hard realizations of rapid value increases in bank shares are also possible. For this reason, experts these days warn that the market should be followed much more closely and that aggressive position changes should not be made. In addition, as we have been explaining for months, individual investors have seen an accelerated course on why leveraged transactions with bank loans should never be made in the stock market.