The fact that domestic consumers lagged behind the pre-epidemic number of shopping, and tourists broke spending records with the effect of the exchange rate advantage, caused brands to turn their attention to foreigners. Efforts have been initiated to spread the tourist shopping, whose share exceeds 50 percent in sales in some regions, to all months of the year. According to the information given by Sinan Öncel, President of the United Brands Association (BMD), the Ministry of Culture and Tourism will highlight shopping in promotional films for Turkey. Representing 467 brands and 59 thousand domestic stores belonging to 90 member companies, Öncel pointed out the ministry and TUIK data, and said that there were significant increases in both the number of tourists, per capita spending and shopping. Stating that it is inevitable that this will be reflected in the retail sector, Öncel stated that the deficit of the locals is now being filled by the tourists, and noted that the rate of foreigners in sales in some regions has exceeded 50 percent.

According to TUIK data, 18.4 million tourists visited Turkey in the first half, while tourism revenues amounted to 14 billion dollars. In this figure, the number of tourists coming for shopping broke a record. Again, according to TUIK data, while 1.5 million foreign visitors came to Turkey for shopping in 2017, this figure increased to 1.4 million in 2018 and 1.6 million in 2019. The figure, which fell with the epidemic, was 764 thousand in 2020 and 774 in 2021. However, the increase in the exchange rate since the last quarter of last year has made Turkey advantageous for shopping. With the effect of the developments, 1 million 177 thousand foreigners preferred Turkey for shopping in the first half of this year, and this figure was recorded as an all-time record on a 6-month basis.

By the end of the year, it will force 3 million 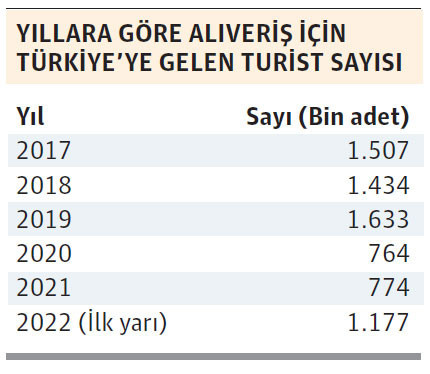 Turnover is carried by tourists

BMD President Sinan Öncel said that although the desired level in unit sales could not be reached, the vitality in retail continues, “There is a 12 percent increase in tourist expenditures in dollar terms. Now comes the tourist who spends more. This is also pleasing, but our agenda is a spreading tourism policy, which the ministry is working on seriously. We also had talks with Minister Mehmet Ersoy on promoting the retail sector and shopping tourism in tourism advertisements. We expressed our opinion that not only traditional tourism but also shopping tourism should be included. The ministry also said that this is true. Therefore, we expect such studies to be carried out on shopping tourism in the coming days. Because one of the most important reasons for the purpose of tourists coming to Turkey is now shopping,” he said. Önel used the following statements: “There is a decrease in sales in terms of quantity, but the increase continues in terms of turnover with the effect of price increases. A significant part of this is also provided by tourists. The turnover rate of tourism is very high. Therefore, we need to keep tourism alive.”

Grand Bazaar tradesmen went to the plus

One of the first places that comes to mind when it comes to tourist spending is the Grand Bazaar, which has a history of 550 years. Evaluating the situation in the bazaar, where more than 140 thousand visitors enter and exit daily, Hasan Fırat, President of the Grand Bazaar Tradesmen Association, said, “There is a lot of increase in the number of tourists right now. Businesses were closed for months during the epidemic period. At that time, debt ratios were high. Now those debts have been closed with the effect of tourists. The tradesmen have grown. We hope that the increase in tourists will continue in this way throughout the year.”

Reaching 60% in sales to foreigners

İzzet Stamati, President of the Registered Trademarks Association, said that the rate of foreign sales is currently up to 60 percent, depending on the brand. Noting that the Saudis came first in the ranking, Stamati said that Kuwait, Iran, Russia and Azerbaijan followed respectively. However, Stamati explained that Turkey is still far behind in the ranking of shopping destinations and said, “There is still a long way to go. Customs duties exceeding 40 percent, especially in the final product, negatively affect Turkey’s competitiveness. Despite the increase in the exchange rate, we remain expensive. In order for Turkey to reach the place it deserves in shopping tourism, taxes need to be revised downwards. In addition, we think promotions are also important. In this context, the coordinated work of the Ministry of Trade and the Ministries of Tourism is important.”