Sebnem TURHAN
At the Monetary Policy Committee (MPC) meeting in October, the Central Bank cut another 150 basis points, above the expectations of 100 basis points, and cut the policy rate from 12 percent to 10.5 percent. In the MPC decision, it was stated that after a similar step was taken in the following meeting, the board put the end of the interest rate cut cycle on its agenda, and the message was given at the November meeting that the interest rate would be reduced to single digits with 9 percent. The Central Bank’s interest rate cut cycle, which started with 100 basis points in August and September each, and increased to 150 basis points in October, directly affects banks’ TL deposit rates. Both exchange-protected deposits and TL deposit rates will decline by 150 basis points, and banking sources pointed out that this will make it much more difficult to meet the target set by the Central Bank for TL deposits. While this would lead banks to buy more government bonds, with the Central Bank discount, it also paved the way for the Treasury to borrow in single digits. Despite the inflation exceeding 80 percent, the 10-year benchmark bond interest remains below 11 percent, thanks to the mandatory bond purchases for banks. Stating that they care about growth and employment and that financial conditions are of critical importance for this, the analysts stated that they made interest rate cuts and that the Treasury’s low-interest funding would also support the growth that the Central Bank drew attention to.
The interest to be paid for KKM will decrease to 13.5%.
The Central Bank cut the policy rate by 350 basis points in the last three months from 14 percent to 10.5 percent. The Central Bank’s discounts are directly reflected in the deposit interest rate in the banking sector. Deposit rates are expected to decrease by 150 basis points. The interest given to the currency-protected deposits can be 3 points above the policy rate, which indicates that the interest rate given by the banks for the KKM will decrease to 13.5 percent after the discount. The banking expert emphasized that it is now very difficult to take TL deposits to the bank, stating that the interest in exchange-protected deposits will also decrease due to the low deposit interest rate, which decreased with the successive discounts of the Central Bank, and the dollar/TL, which remained flat with the sales made by the public side. In an environment of high inflation exceeding 80 percent, the Central Bank, which funded banks at a low cost with the weekly repo rate, took steps that required the holding of additional fixed coupon bonds in order to decrease commercial loan rates and increase the share of TL deposits. Pointing out that it is difficult for banks to reach the 50-60 percent limit in TL deposits, banking sources emphasized that it will be much more difficult especially with the falling deposit rates with the discount. For this reason, banking sources pointed out that banks would have to buy government bonds at low interest rates, and drew attention to the fact that the system operates as a complete closed circuit. The banking expert, who said that the Central Bank also aims to fund the budget side with the discount, emphasized that the system gives money with swaps and buys bonds on the TL side and continues as a closed circuit.
HOW EXPERTS COMMENTED THE CENTRAL BANK’S PPK DECISION

TOBB ETU Faculty Member Assoc. Dr. Atılım Murat: I wish the Central Bank had lowered the interest rate directly to single digits at the meeting and we would have stopped talking about single digits. It doesn’t matter whether the interest rate is 10.5 or 9 percent, as the market mechanism is no longer fully functioning in Turkey. The interest rate cut is not reflected in the loan interest rates because we have closed the loan channel. In other words, we have a loose monetary policy on the one hand and a tight monetary policy on the other. Macroprudential measures with a symbolic policy rate are more important. Those who created this policy also see that there is no need for banks to collect deposits. Finally, what will the banks do with the deposits since loans are not given? That’s why the Treasury needs new bond issuance. The banks, which will not be able to meet the TL deposit rate, will have an additional demand of 80 billion TL for Treasury bonds considering the total deposit size today. And the Treasury doesn’t have that many bonds. He will have to go to export again.

Gedik Investment Chief Economist Serkan Gönençler: CBRT maintains its growth priority, single-digit policy rate is highly likely in November. Drawing attention to the decrease in foreign demand in its statement, the CBRT explained the reason for the 150 basis point interest rate cut, emphasizing that it is critical that financial conditions be supportive in terms of sustaining the acceleration in industrial production and the upward trend in employment in a period when uncertainties regarding global growth and geopolitical risks have increased. Accordingly, it is seen that the CBRT maintains its growth priority. The CBRT continues to state that it will continue to strengthen its tools to support the effectiveness of the monetary transmission mechanism. Accordingly, despite the high levels of inflation expectations, we can say that the downward pressure on TL bond rates will continue. This decrease in TL bond rates may also ease the government’s hand regarding the expansionary fiscal policy in the upcoming period. Considering that commercial loan rates are indexed to the reference interest rate with macroprudential measures, commercial loan rates may decrease from around 19.0% to around 17.0% in the coming days.

■ IT DOESN’T SAY ANYTHING NEW ABOUT INFLATION

IS Investment Economist Dağlar Özkan: The CBRT supports market expectations by implying that it will end the discount cycle at 9.0%, which is currently priced by the market. The Central Bank continues to explain the main reason behind the interest rate cut cycle as the loss of momentum in economic activity stemming from foreign demand. The press release for the October meeting is very similar to the August and September texts, except for the direction for November. There is no change in the explanations for macroprudential practices. The Central Bank does not say anything new about inflation either. It is repeated once again that the disinflation process will begin with the establishment of global peace. We maintain our year-end USD/TL rate forecast as 20.00 TL. In the period when the current account balance deteriorates, portfolio outflows continue and external debt service increases, we believe that the nominal depreciation of TL will accelerate somewhat and this will be positive for the foreign trade balance. However, we do not expect an inconsistent currency shock similar to the winter of 2021. 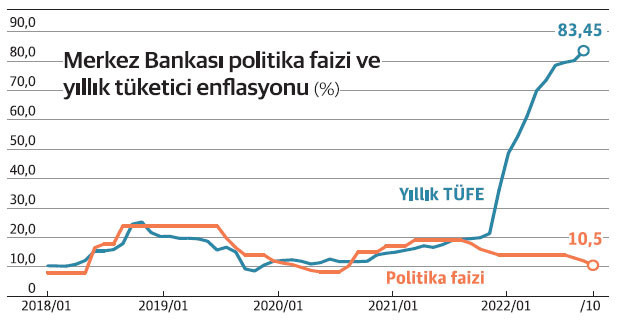 InvestAZ Investment Research Director Dr. Tuğberk Çitilci: The Central Bank’s statement is that the policy rate will reach 9% with a 150 basis point interest rate cut for the November meeting and that the interest rate cuts will be terminated for 2022 as the baseline scenario. In this context, the CBRT will skip the December meeting and monitor the economic activity, recession and export dynamics of the European Region and create its scenario based on conditions for the first quarter of 2023. In this context, the CBRT may have a discount area of ​​200 basis points in the first quarter of 2023.

Piri Reis University Vice Rector Prof. Dr. Erhan Aslanoğlu: Although the CBRT decision is a higher-than-expected discount, it is not a surprise. We see that the 9 percent policy rate, which we expected with the latest decision, will be realized in November. We expect the CBRT’s interest rate decisions to have an impact on exchange rates, credit expansion and therefore inflation. At this point, we see that the monetary policy has become neutral. Exchange rates are tried to be managed with macroprudential policies, liraization and reserve policies. Net errors and omissions item in the Balance of Payments is quite decisive on the exchange rates. It will probably continue for a while. Despite the interest rate cut, we see that the credit expansion is not strong. KGF packages can restart credit growth with the Central Bank’s interest rate cuts. One of the most tangible results of falling interest rates is the decrease in the borrowing costs of the Treasury and the easier financing of possible budget deficits. We hope that the environment of peace emphasized by the Central Bank will be realized as soon as possible. Accordingly, let’s not forget that there have been significant declines in energy and global food prices, which we hold responsible for inflation, in recent months. We need to identify the causes of inflation well. As a result, continuing to ease monetary policy while inflation rises increases medium-term inflation risks.

Ending the discount cycle is on the agenda

The Central Bank stated in the MPC resolution text of October that the leading indicators of the second half of the year pointed out that the slowdown in growth due to the weakening foreign demand continued, “The growth rate of loans and the meeting of the financing resources with economic activity in accordance with their purpose are closely monitored. In addition, the balance reached by the policy-loan interest rate gap, which has widened significantly recently, with the contribution of the announced macroprudential measures, is closely monitored. The Board will continue to strengthen its tools to support the effectiveness of the monetary transmission mechanism. The interest rate cut will also create a maximum decrease in commercial loan rates. While the Central Bank reiterated that the disinflationary process will begin with the establishment of global peace, the following points were noted in the text: “The effects of the decreasing foreign demand on aggregate demand conditions and production are closely monitored. It is critical that financial conditions be supportive in terms of sustaining the acceleration in industrial production and the increasing trend in employment in a period when uncertainties regarding global growth and geopolitical risks increase. In this context, the Committee decided to reduce the policy rate by 150 basis points. After a similar step was taken in the following meeting, the Board put on the agenda the end of the interest rate cut cycle. The CBRT continues to review a comprehensive policy framework that encourages permanent and strengthened liraization in all policy instruments. Credit, collateral and liquidity policy steps, whose evaluation processes have been completed, will continue to be used to strengthen the effectiveness of the monetary policy transmission mechanism.