Mehmet KAYA
ANKARA– President Mahmut Arslan, who made a speech at the Extended Board of Presidents meeting held on the occasion of the 47th anniversary of the HAK-İŞ Confederation, said that there was a need for a fair tax reform in favor of the employees. Mahmut Arslan also stated that within the framework of the preparations made for the solution of the problem called “the problem of those stuck in retirement age-EYT”, they are making efforts to make sure that those who were employed before 8 September 1999, when the retirement age was extended, are subject to the old legislation. Regarding the accident in which 41 people lost their lives in the mine owned by the TTK in Amasra, the Chairman of HAK-İŞ said, “I am not saying this to blame anyone, but 95 percent of mining accidents can be prevented. Being aware of this, we need to identify where there are errors and omissions,” he said.

Mahmut Arslan made evaluations about current working life problems in his speech. Underlining that Turkey needs a fair and equitable tax reform, Arslan criticizes the low determination of income tax brackets and said, “We lose the gains we have made in collective agreements due to tax brackets in a few months. We also have a solution proposal for the crisis period. We want all tax rates to be limited to 10 percent until Turkey gets rid of the crisis, high inflation, high foreign exchange and the normalization of the cost of living,” he said. 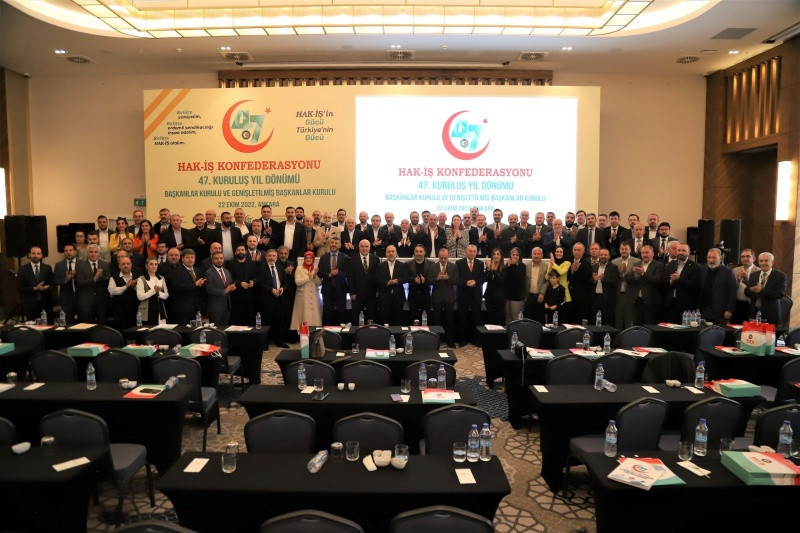 “We want the rights of people who were employed before September 8, 1999 to be restored”

Noting that those who were employed before 8 September 1999 demanded that they be subject to the old legislation in preparation for the regulation on the problem of those who are old at retirement (EYT), and that they are making an insistent effort on this issue, Mahmut Arslan said, “We want the next regulations to be for new hires. We also accept it, but we want the rights of people who were employed before 8 September 1999 to be restored. We show serious determination in this regard. We will continue to explain this on every platform.” said.

Mahmut Arslan, who also made evaluations about the accident in which 41 people lost their lives in the mining quarry belonging to the TTK in Amasra, pointed out that he had solved the firestorm explosions on a world scale. He said that this accident does not suit Turkey. Arslan said, “Of course, production, employment and profit are important, but first of all, human, human life comes first. Unfortunately, we have not been able to achieve this. We are still at the top of the world rankings when we look at the public figures and put the exaggerated numbers on work accidents aside. Despite all the precautions, we could not solve this problem. The solution to the problem is not only legislation but also a mentality change is needed. Employers should abandon the approach of ‘how can we get around behind the law and not fulfill our responsibilities’ and have a concern and wish for how we can secure the lives of employees. Our employees should not act by saying ‘nothing will happen to us’. We must tackle this problem together.” he said.

HAK-İŞ President Mahmut Arslan stated that in their meeting with the Minister of Labor and Social Security Vedat Bilgin, they made a request for the improvement of the personnel rights of the subcontractor workers, who were previously recruited by the Decree Law No. 696, and they reached an agreement. Arslan also stated that with the new regulation, it was agreed that all employees, especially those who are outside the scope of the aforementioned Decree, should be recruited.

“We must protect the TRNC”

Referring to the struggle of the Turkish Republic of Northern Cyprus in his speech, Arslan said, “Our brothers in the TRNC have the right to live in a free, independent, world-renowned state. We have to find solutions in which the Turkish Cypriots will not leave their homeland economically, socially and politically. We need to prevent Turkish Cypriot youth from seeing the solution in Europe and England. For this, we should give more support and contribution to the TRNC. It is extremely wrong to perceive state support to the TRNC as if it is a debt of Turkey. Turkey’s security passes through the Island, the future of the Blue Homeland passes through the Island. Therefore, the state of the Republic of Turkey has to protect and support the Island for its own security and future.” said.