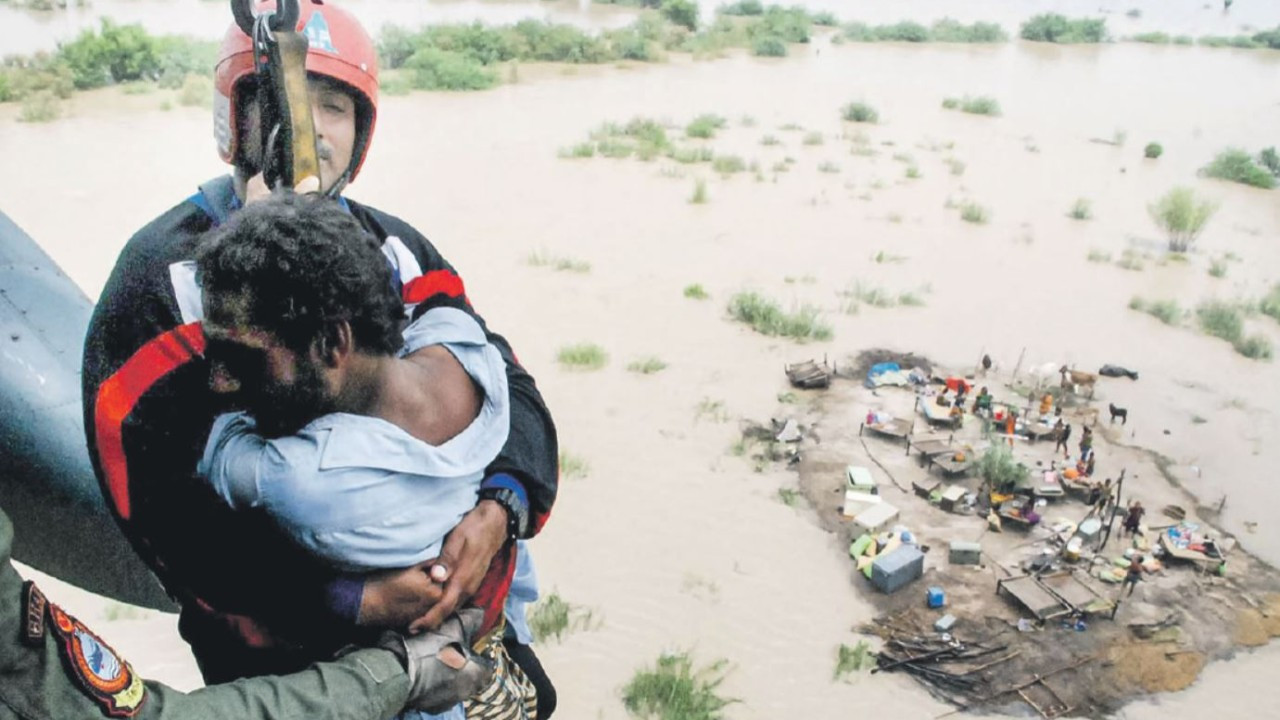 Didem ERYAR Celebrity The toll of the destruction caused by the floods caused by the monsoon rains that have been effective in Pakistan since 14 June has been heavy. According to the data of Pakistan National Disaster Management Agency (NDMA), more than 1,400 people lost their lives and 12,728 people were injured in the floods caused by the ongoing rains since June 14. Of those who lost their lives due to the flood disaster, 499 were children and 280 were women. While 6,674 kilometers of roads were damaged across the country, 269 bridges were destroyed. Due to the floods, 1 million 743 thousand 345 houses were damaged, 568 thousand 817 of them were completely destroyed. 750 thousand 223 farm animals perished. The widespread destruction in the country has disrupted the education of more than 3.5 million children. About 22,000 schools became unusable in the provinces of Sindh, Balochistan, Punjab and Khyber Pakhtunkhwa. Pakistan’s Minister of Revenue and Finance Miftah Ismail expressed the economic cost of the floods as $10-12.5 billion, while independent observers estimate it to be between $15-20 billion and will increase further. United Nations Secretary-General Antonio Guterres said that the cost of the flood disaster to Pakistan was 30 billion dollars. It is stated that the restoration of the destruction caused by the floods in Pakistan will take years. The comment of Pakistan’s Climate Minister Sherry Rehman is very clear: “This is not a natural disaster, it is the catastrophe of the Anthropocene; i.e. human-induced.”

Less than a year ago, at the end of Climate Summit COP26 in Glasgow, developed countries returned home, “postponing” their quest to create a financial mechanism for the loss and damage wrought by the climate crisis in developing countries. Countries exposed to the effects of the climate crisis but not historically contributing to the climate crisis have long sought support for the loss and damage they have suffered. Developed countries, on the other hand, have long feared taking on this responsibility. At the point we have reached today, things have become much more complex. The Russia-Ukraine war, Europe’s energy supply crisis, and the food, fuel and financial crises that followed, increase the number of countries lining up at the door of the IMF. And unfortunately, the environment conducive to the cooperation needed to combat the global climate crisis is shrinking.

So, can the plight of Pakistan, which is responsible for only 1 percent of global emissions but with a third of its country under water, mobilize advanced economies to break the financing stalemate over loss and damage? British academic Rachel Elizabeth Kyte, Dean of Tufts University’s Fletcher School, is also a member of the UN Secretary-General’s senior advisory group on climate action and co-chairman of the Voluntary Carbon Markets Initiative. Chosen as one of the 15 women leading climate action by Time magazine in 2019, Kyte lists 5 ways to overcome this impasse:

Concerning the consequences of liabilities and indemnities, loss and damage negotiations and financing are in a stalemate. As a result, countries take action on their own. The Republic of Vanuatu, an island country in the South Pacific, announced that it will take the issue of climate change to the International Court of Justice, as it “needs recommendations that explain more clearly the responsibilities of countries” on reducing the emission of greenhouse gases into the atmosphere defined in the Paris Climate Agreement. The answer to Vanuatu, which has asked the International Court of Justice for an opinion on the right to be protected from the effects of climate change, is very important for the future. The State of Vanuatu has made the issue of climate change a priority since its establishment in 1980. At international meetings, he emphasized that “although the country’s negative contribution to greenhouse gas emissions due to human activities is negligible, it is one of the countries most affected by climate change.” Although some developed countries claim that humanitarian interventions and adaptation financing cover loss and damage. , this situation is not enough to deal with the damage suffered.

Although the concept of “loss and damage” is not a concept that is highly desired in Washington DC, Bern or Paris, the establishment of a solidarity-based financing mechanism in the short term and the understanding of “We broke it, we will fix it” is the basis of this mechanism. he needs to get it. Reaching an agreement on this will be one of the priority items of COP27, which will be held in Sharm el-Sheikh in November. In order to act in solidarity with countries that have not contributed to emissions so far, it is very important to be able to agree on the principle of moral responsibility. “Solidarity” funding; Beyond mitigation and adaptation commitments and international disaster funds, it can be created quickly using many different mechanisms.

Solidarity taxes may be imposed on a range of luxury or emission-intensive activities. For example; A “1 dollar” solidarity tax may be added to business class flights. Different practices could be developed regarding taxes and fees on carbon pollution, voluntary carbon market transactions, or fossil fuel companies could be subject to a solidarity fund tax on high profits. Pakistan’s Climate Minister, Sherry Rehman, also states that “big polluters who profit more than the GDP of many countries should take responsibility”. As a matter of fact, UN Secretary-General Antonio Guterres has asked for a special tax to be imposed on energy companies that have made record profits in recent months, saying that it is “immoral” for companies to profit from such a crisis while people in many parts of the world are struggling with rising energy bills.

4 THE RICH SHOULD KEEP HANDS UNDER THE STONE

Philanthropy can also play a crucial role in financing the damage and losses caused by the climate crisis. Today, only 2 percent of global donations go to climate action. A very small portion of this amount contributes to climate justice. There are no funds for international losses and damages. Whereas; Laurence Tubiana of the European Climate Foundation and Christie Ulman of the Sequoia Climate Fund have provided philanthropists with crucial guidance on how to take action.

We need developed countries to act together, because we have no time to lose. The UN has called for a funding of $160 million for Pakistan, less than 2 percent of the estimated cost. The words of Secretary General Antonio Guterres were very meaningful: “Next time, this could be your country. This time we need solidarity for Pakistan. It could be for you tomorrow. It’s our job to solve this problem.”