5 commodity groups that feel the energy crisis to the bone!

Evolution SMALL
Unlike the oil crisis of the 1970s, triggered by the heartbreaking war in Ukraine, the chaos in the natural gas, coal and electricity markets continues to affect commodity markets. Oil prices have increased by 19 percent and coal prices by 200 percent since the beginning of the year. The energy crisis is getting worse day by day and as the winter months approach, it is expected that the price increases will continue as the demand increases seasonally. This puts pressure on the commodity industries that produce the ‘raw material’ of the global economy. It is increasingly feeling the crisis in the production of energy-intensive basic metals such as aluminum and zinc. Steel production slows down. It is warned that the shining stars of the green economy such as lithium may experience larger price increases due to energy problems. Electric car batteries and materials crucial to solar power generation are also feeling the strain. On the agricultural side, while the negative effects in fertilizer production are expected to continue, sugar, the raw material of ethanol, which emerged as an important alternative in the energy crisis, is among the products most affected by the energy crisis. As the winter months, which threaten gas supplies, approach, the picture looks bleak for some commodity groups: 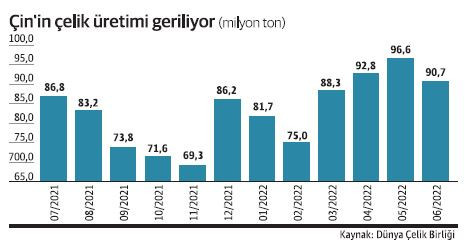 Power cuts in China’s Sichuan region have forced more than 70 percent of domestic steelmakers to halt production or to reschedule their sales. This puts pressure on the prices of iron ore used in steelmaking. In July, China’s steel production fell 6.4 percent year-on-year. According to National Bureau of Statistics data, China produced 81.4 million tons of steel in July, compared to 90.7 million tons in June. In Europe, British Steel had to increase its prices due to rising energy costs. German steel and metalworking industry federation Wirtschaftsverband Stahlund Metallverarbeitung (WSM) has warned that the government’s additional natural gas tax decision will create an additional cost of 17,000 euros per employee for some steel companies. German-based Eizenhüttenstadt, a subsidiary of Arcelor mittal, reduced its working hours in August and September due to pressure from gas prices. At least two steelmakers in the US have started to suspend some of their activities to reduce energy costs. 600 workers at America’s second-largest aluminum plant, which accounts for 20 percent of the U.S. supply, lost their jobs as the factory failed to cover an electricity bill that had tripled in a matter of months. Century Aluminum has closed its facility in Hawesville, Kentucky, for a year, the largest of its three facilities in the US. The country’s largest aluminum producer, Alcoa Corp. announced that it has shut down one-third of its production at its Indiana plant due to “operational difficulties.” 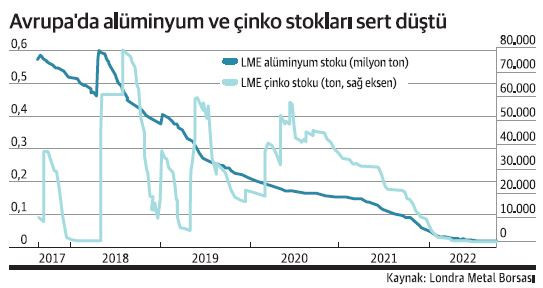 The electricity crisis in Europe is wreaking havoc on the region’s industrial metals sector. Last week, two more smelters announced plans to cease operations. Norsk Hydro ASA announced that it plans to shut down an aluminum smelter in Slovakia at the end of September due to rising energy prices, and Nyrstar will shut its giant Budel zinc plant in the Netherlands. Europe has lost about half of its zinc and aluminum smelting capacity over the past year, and more production losses are imminent. The region may become more dependent on imports due to low stocks. The aluminum industry is also affected in Sichuan, one of China’s most populous provinces, where drought has hampered significant hydroelectric production. This forced smelter Henan Zhongfu Industry Co. to shut down production for a week for some units there. U.S. suppliers are also suffering, and some manufacturing facilities are idling.

Fertilizer is also dependent on gas, usage will drop by 7 percent

European fertilizer companies depend on natural gas for their production. At least a quarter of Europe’s nitrogen fertilizer capacity is thought to have already been lost. In July alone, 10 fertilizer plants in Europe cut production or closed. Fertilizer manufacturers Yara International, K+S, Borealis and Fertiglobe have also recently warned of further production cuts across Europe. The International Fertilizer Association (IFA) predicts that global use will fall to the lowest level since 2008 next season. Global fertilizer use will decrease by 7 percent next season, according to IFA. IFA says the biggest drop in fertilizer use will be in sub-Saharan Africa, with 23 percent.

Green metals will also make a premium in the last quarter

China’s energy crisis means the battery industry must be prepared for the higher costs of lithium. Sichuan accounted for more than a fifth of China’s lithium chemical production last year, and analysts expect prices to rise in the short term. It is estimated that the prices, which have increased by 357 percent in the last 1 year, to the level of 480 thousand yuan/ton, will continue to increase in the last quarter of the year. In addition, the production of polysilicon used in solar panels is in trouble. The price of silicon metal, which goes into everything from computer chips to cars, rose 12 percent in just one week.

Sugar may feel pressure from rise in ethanol production

Another important raw material that can react to the deepening of the energy crisis is sugar. European sugar giant Suedzucker AG, which has warned of higher prices due to rising production costs, said it has contingency plans to switch from gas to other energy sources if Russia stops its flow. But analysts say it can be an expensive process and mean more expensive sugar for consumers. Sugar is affected not only by the increase in production costs, but also by the increased demand for ethanol during the rising energy prices. For example, sugar production in India is expected to fall by 1.4 percent in 2022-23 as more sugar cane is diverted to ethanol. Ethanol consumption in the European Union set a new record last year, surpassing the pre-COVID level. EU ethanol consumption is expected to increase by an additional 2.3 percent this year, according to the USDA Foreign Agricultural Service’s annual biofuels report submitted to the Global Agriculture Information Network.